Northland Mall Security will not be Charged in Asphyxiation Death

Northland Mall Security will not be Charged in Asphyxiation Death
(Crystal A. Proxmire, Sept. 19, 2014)

Oakland County Prosecutor Jessica Cooper has announced that the Northland Mall security guards that caused the death of 25-year-old McKenzie Cochran of Ferndale on Jan. 28 will not be criminally charged.
A press conference on Thursday, Cooper said “This is not an issue of whether these security guards were negligent; it’s whether they were criminally negligent.” (http://www.detroitnews.com/story/news/local/oakland-county/2014/09/18/northland-mall-death/15838793/)
She added that “The findings did not support that any officer tried to restrict his breathing by choking him. There was no intent to harm. They didn’t hit him. They didn’t place him in a chokehold.”
On Jan.28 the man had a verbal confrontation with Northland Mall security guards, who pepper-sprayed him and held him to the ground. Witness’s cell phone recordings show Cochran telling guards that he couldn’t breathe. He lost consciousness and efforts to revive him were futile. The cause of death was determined to be “accidental position, compression, asphyxia.” 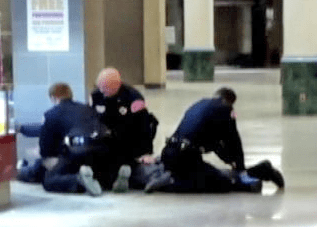 Security had been called by the owner of jewelry store who felt threatened by Cochran’s presence, and said the man threatened to kill somebody. The death happened while Southfield Police were en route, but had been sent by security to the wrong part of the building.
Southfield Police Chief Eric Hawkins said the death was “a tragic accident that appears to be heavily influenced by a lack of training by a private security company.”
Cochran’s family has retained attorney Gerald Thruswell to sue the mall, security guards, and security company for $800 million.
For previous stories on Cochran’s death, including video of a prior press conference, see:
http://oaklandcounty115.com/2014/01/30/ferndale-resident-dead-after-being-restrained-by-mall-security/
http://oaklandcounty115.com/2014/02/10/investigation-continues-in-northland-mall-death-video/
http://oaklandcounty115.com/2014/03/12/northland-mall-death-caused-by-position-compression-asphyxia/