Increase in Thefts from Unlocked Vehicles…

Increase in Thefts from Unlocked Vehicles in Ferndale and Surrounding Communities

(Crystal A. Proxmire, Sept. 18, 2014)
People throughout the region have reported thefts from unlocked vehicles. We’ve reached out to departments in the area to get a sense of how common this is.  Below are responses from the different departments.  This will be updated as more information is received.
From Lt. William Wilson, Ferndale Police Dept…
Generally,

crime has been significantly down in Ferndale over the last year. But  the region, including Ferndale, has experienced a surge in Larceny From Vehicles (LFA’s). There have been over sixty (reported) LFA  incidents in Ferndale over the last three months.
Eight of the attacked vehicles had wheels stolen; three people on two incidents have been arrested for this type of theft.
The remainder of the vehicles attacked had items (money, electronics, purses, etc) stolen from inside the passenger compartment of the vehicles. Most of the crimes occurred during dark hours when most people are asleep. Thieves are attacking cars

parked in the streets and in driveways. The common denominator in almost all of these thefts is that the owners left their vehicles unlocked. The best way for citizens to avoid being a victim of a LFA is to lock their car doors and not leave valuables in plain sight.
The LFA’s have been occurring all over the City. Dividing the City into quadrants using 9 Mile Rd. and Woodward, the hardest hit section is in the SW region and the least amount of thefts has been in the NW section.  These crimes are ongoing and yet unsolved.
In addition to locking vehicles, citizens should be attentive to suspicious people, unusual behavior, and suspicious noises. At the first inkling that something might be wrong and there is the slightest possibility of

criminal activity, citizens should immediately call the police. These calls will help the Ferndale Police Department to solve these crimes and prevent future thefts.
A helpful, easy to use website to see where these LFA’s or other crimes are occurring is Crimemapping.com.
FERNDALE UPDATE (by oc115)…  Ferndale residents have begun sharing an alert flier with their neighbors and posting it on electric poles.  (To download the flier click here.) The following are the LFAs we found in police records between Sept. 1 and Sept. 16…
Sept. 13 – Albany, Pinecrest
Sept. 11 – Leroy
Sept. 9 – Browning, University, Leroy
Sept 8 – Academy, Ardmore (three reported)
Sept. 7 – Ardmore, Kensington, E.Webster (two reported)
Sept. 6 – W. Troy and Allen (three reported)
Sept. 4 – Laprarie, Stratford
Sept. 2 – Albany 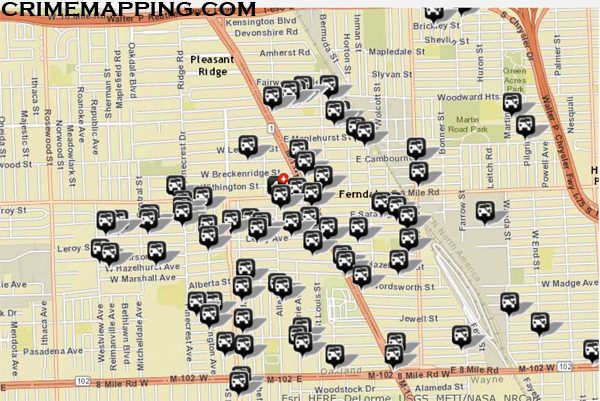 From Farmington Hills Police…. FHPD is currently investigating several larcenies of wheels and tires from

vehicles in the area of Orchard Lake & 14 Mile. Anyone with information regarding these incidents is urged to call FHPD at 248/871-2610. Anyone observing any suspicious persons, activity, or vehicles is directed to call 9-1-1 for priority police response.
Vehicle owners are reminded to ensure that their vehicles are locked and valuables are not left visible inside the vehicle.
From Lathrup Village Assistant City Administrator Martha Potere…    I just spoke with our police department. There has

not been an increase in vehicle break-ins. Any left is usually the result of someone not locking their doors. Items stolen tend to be wallets, cash, laptops, cell phones, etc. – small things that get stolen because someone left them in plain sight, so their advice was to put any and all valuables in the trunk or take them out of the car.
From Auburn Hills Police Director Doreen Olko… (in message sent to residents)  Thanks to you, we had a pretty good weekend with respect to thefts from cars.  You’ve been doing much better about locking your cars so as not to be an easy target for these thieves.  Also the Sheriff’s Office arrested one of our main suspects in the act out in Independence Township (someone noticed this person as out of place and called).  Although he is not willing to admit to being responsible for our thefts, we note that the sheer number has gone down.  Now that doesn’t mean you can go back to leaving your purse in an unlocked car–there are several other

(7) of those entered vehicles were not locked by the owner prior to the theft, and another one (1) in which the owner could not remember whether the vehicle had been locked. There have not been any reported incidents of suspects entering a motor vehicle to steal this past month. In 2012 – 2013 the City had fifteen (15) incidents where the suspect (s) entered the vehicle to steal items.
In the City of Clawson, the theft of items from motor vehicles occurs mostly from vehicles that are left unlocked and unattended. Most of the items stolen were valuable and left in plain sight for an opportunistic thief to clearly observe and easily open an unlocked door to steal. Some of the items stolen included cash, CD’s, gift cards, wallets, purses, credit/debit cards, sunglasses, golf clubs, and lap top computers. Although our Officers are very active on patrol, no arrests have been made in the reported incidents.

Every year the Clawson Police Department investigates complaints of thefts from motor vehicles. Most criminals are opportunists, in that they watch for people to take advantage of. People can help themselves to not become victims. The following are tips for people to keep in mind to keep them from becoming a victim.
~When you park your vehicle at home, or are out shopping at the store or mall, park your vehicle in a well-lighted area. Lock your vehicle when you leave it and avoid leaving valuable items out in the open. Electronics such as cell phones, lap-tops, GPS units, IPODS or similar items are targets of theft. Put your valuables in the trunk if possible, but avoid doing so in plain sight.
~Avoid parking next to vans or other vehicles that you cannot see into in a parking lot.
~While shopping, avoid leaving a purse or valuables unattended.
~When you are out shopping, be aware of your surroundings; don’t present an appearance that your mind is focused on other things. 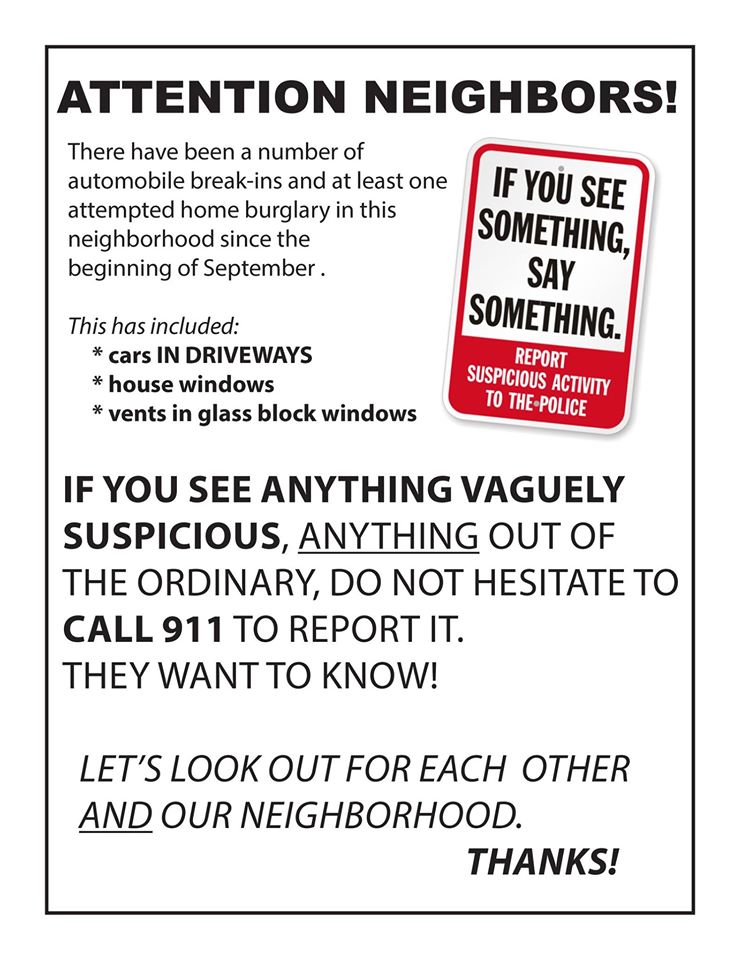