(Crystal A. Proxmire, Sept. 1, 2014)
On Aug. 25 Oakland County Sheriff’s Deputies responded to the 2000 block of Lakeville Road in Oxford Township. According to Undersheriff Mike McCabe “The protesters were advised by security and by deputies that they were 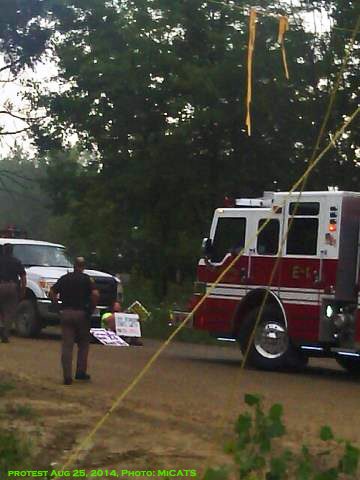 trespassing. Most of the protestors vacated to the road easement without incident.
“Two protestors placed bicycle locks around their necks and attached themselves to the front truck frame of a Precision Pipeline vehicle. The subjects were again advised that they were trespassing but would not detach themselves when ordered by Deputies.
“The Oxford Township Fire Department

responded and removed the bike locks with heavy duty bolt cutters from the trucks and subjects. The two subjects were lodged at the Oakland County Jail pending warrants.”
Duncan Tarr of Livonia and Dylan Ochala-Gorka of East Lansing were arrested and released with charges pending, according to the group MiCATS, Michigan Coalition Against Tar Sands. The group is trying to stop the expansion of a tar sands pipeline being constructed by Enbridge. The pipeline is going through Addison and Oxford

Township, and the protest on Aug. 25 stopped the work of Precision Pipeline, a subcontractor on the project. Approximately 30 vehicles lined the road waiting for the men to be removed from the truck.
In addition to the 2010 Kalamazoo River spill, Enbridge has drawn the attention of the State of Michigan, with Attorney General Bill Schuette and the Department of Environmental Quality ordering them to comply with contract details in regards to their pipeline in the Straits of Mackinac.
“At one time in the world there were woods that no one owned. Now our planet has been bought up, torn apart, and exploited for the profit of a few individuals. My act of defiance is an act gainst the machine, meant to slow and halt its destruction, and protect the earth, and all life. Enbridge, and the pipelines they control, are a central part in the destruction of life,” said Tarr in a post on the MiCATS website.
The video below was made by MiCATS:

Two other MiCAT protestors were arrested in July for trespassing during a demonstration. For more on those 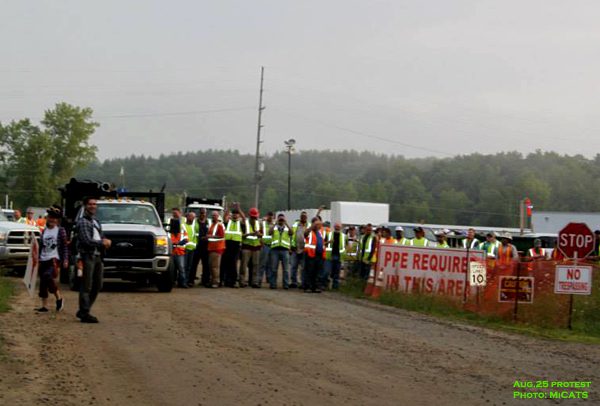