The Day After the Flood: Hard Work, Loss, and Community (video)

The Day After the Flood: Hard Work, Loss, and Community (video)
(Crystal A. Proxmire, Aug. 12, 2014)
NOTE: The video below is an interview with Royal Oak Mayor Jim Ellison and a man who was trapped in the avalanche.

on what they lost. South Oakland County was hit hard, with a three hour downpour that dumped 5-6 inches of rain.
House by house people who have never experienced flooding before now found themselves clearing out sopping wet carpet, soggy boxes, ruined electronics and destroyed memories from basements. People learned the hard way that plastic tubs don’t make much difference when the water level reaches the lid, while others were sick with fear that they might face electrocution or gas leaks. For some it was a trickle of

water, for others the flooding filled up to their basement ceilings.
In Hazel Park the 911 system was overwhelmed with people calling in flood complaints. On top of it, the 911 system went down due to flooding in the Ferndale Police Station. The basement of Ferndale City Hall and the newly renovated Police Station are going to need renovations to recover.
Outside the streets filled with water. People posted photos of “Lake Silman” or “Lake Saratoga,” or whatever body of water was in front of their houses. In places the water was over waist high on reasonably level ground. The devastation happened deeper  in the freeways, where large dips formed giant pools and people were trapped by the incoming flood of water.
The I-75 and 696 Interchange was the worst, and even the next day water was as

high as 14 feet. On I-75 near 10 Mile road, an area in the corner of Royal Oak, Madison Heights, Hazel Park and Ferndale, a broken pipeline caused a catastrophic waterfall that washed over the cars beneath it and sent and avalanche of mud to the freeway below. Warren resident Craig Payne was among those trapped in the water.  In the video above, Payne describes having to be rescued by State Police with a rope.  Royal Oak Mayor Jim Ellison explained how the water cut the power lines to the pump station, and eventually eroded away dirt from beneath two full lanes of the service drive.
To see an interview with Mayor Ellison and a man who was rescued from a vehicle 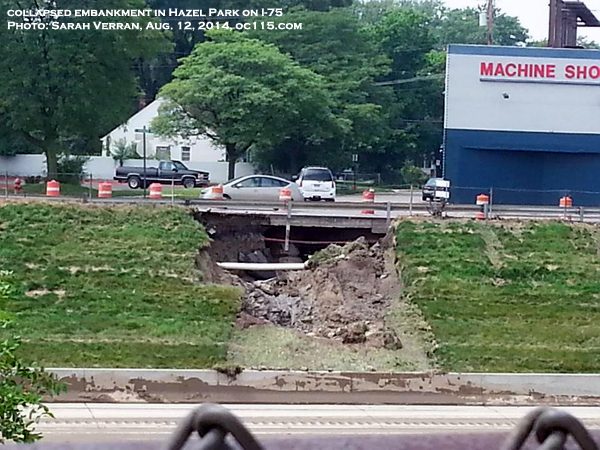 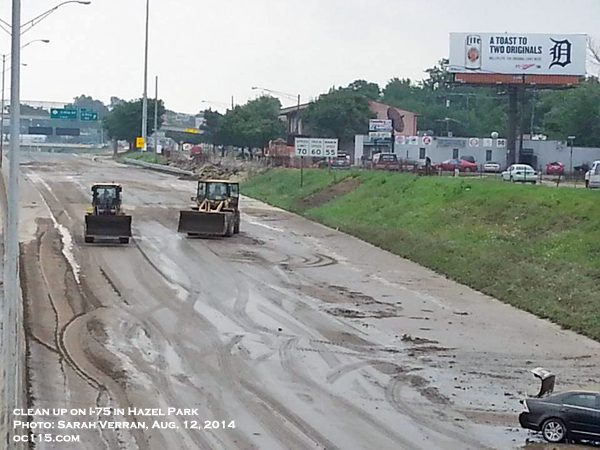 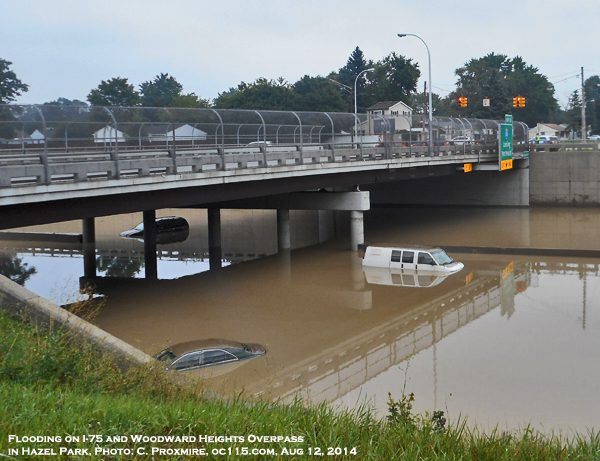 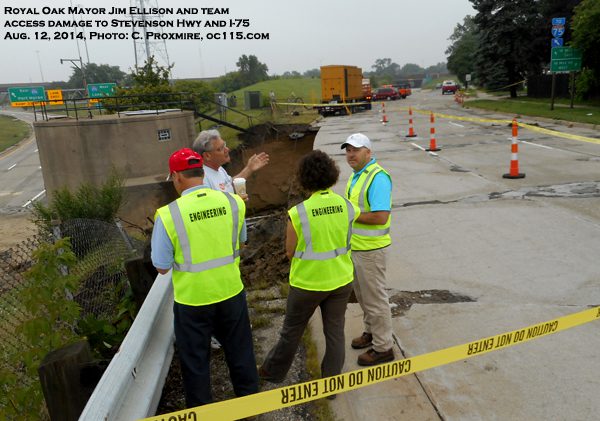 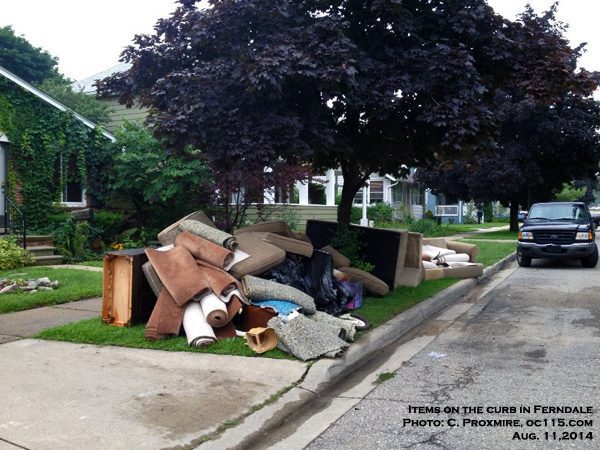 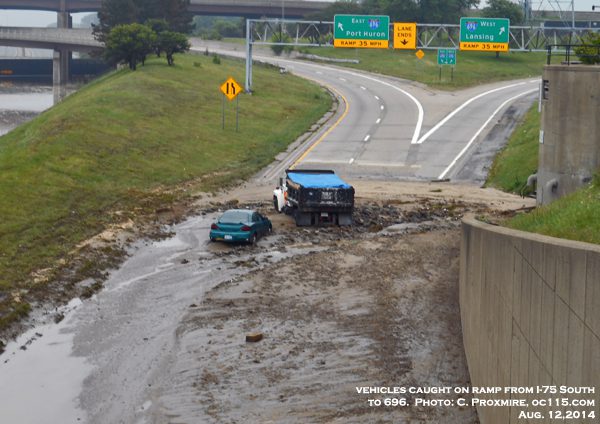 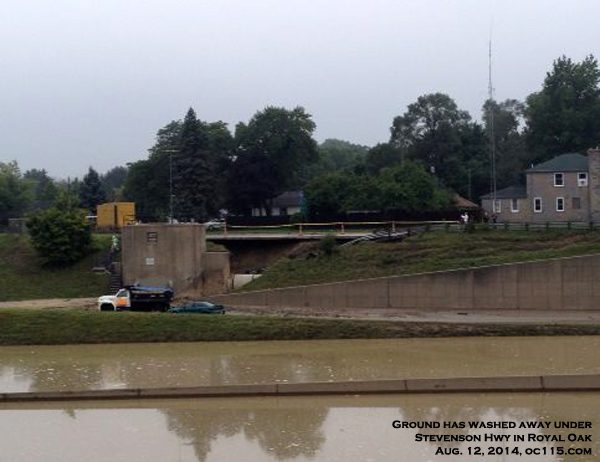 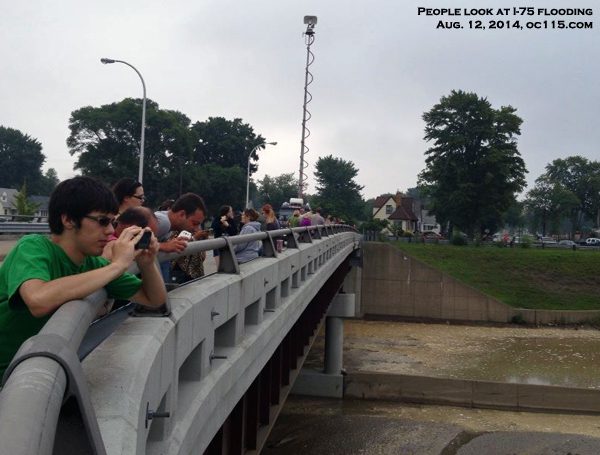 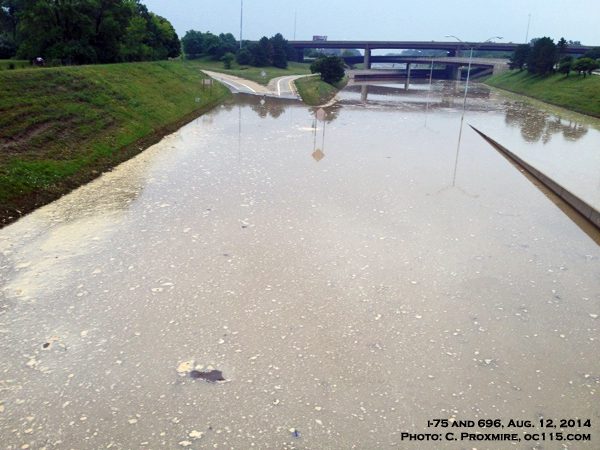 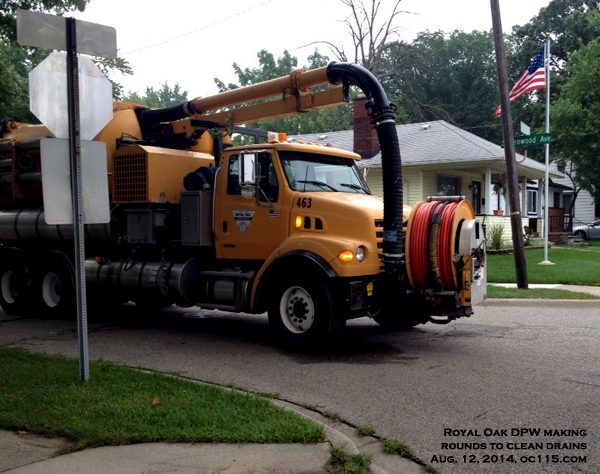 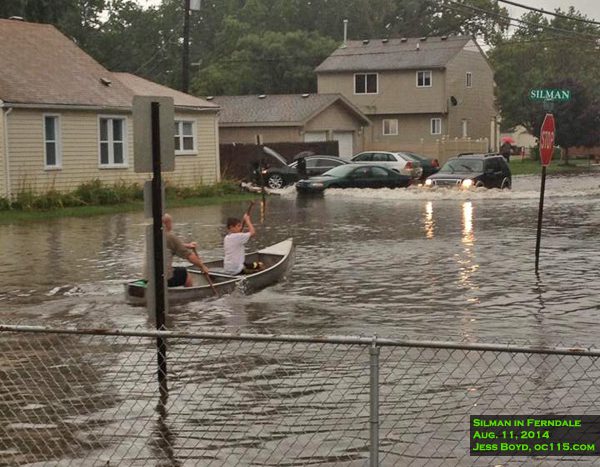 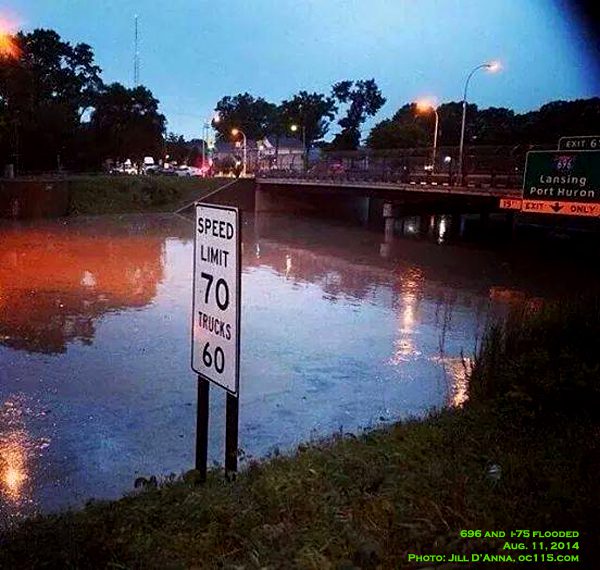 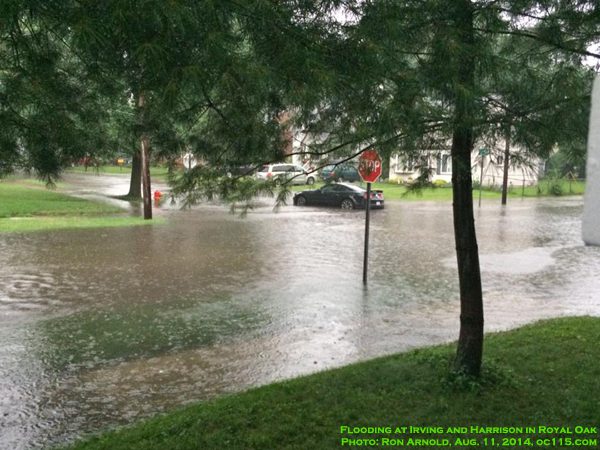 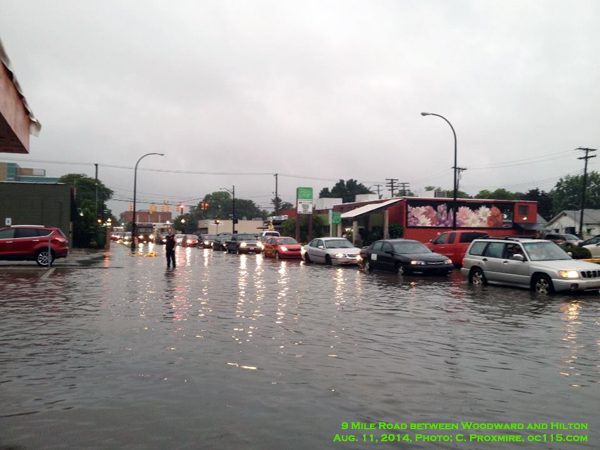 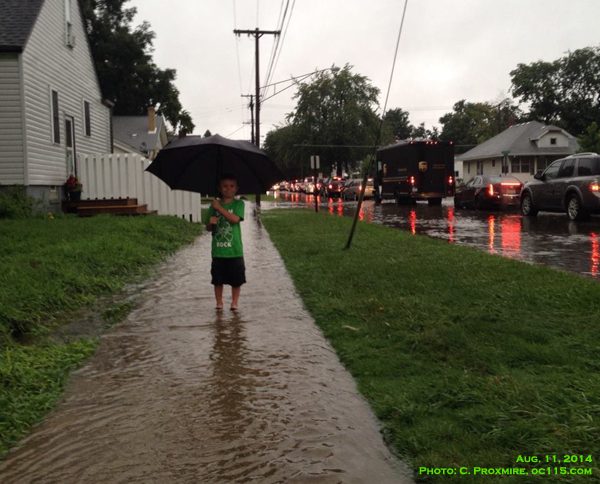 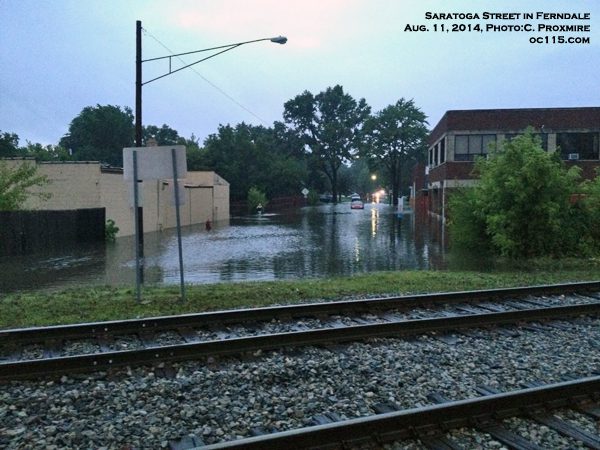 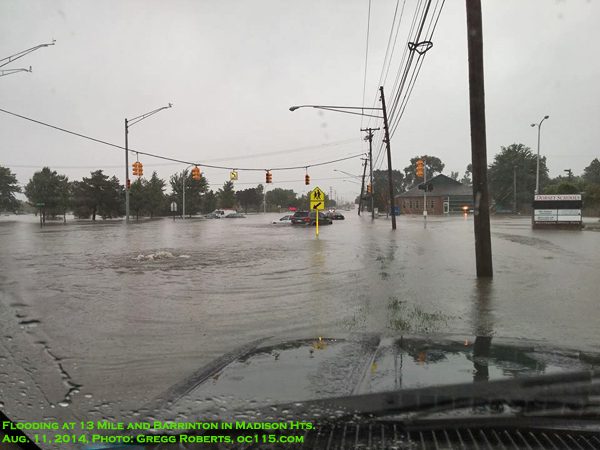 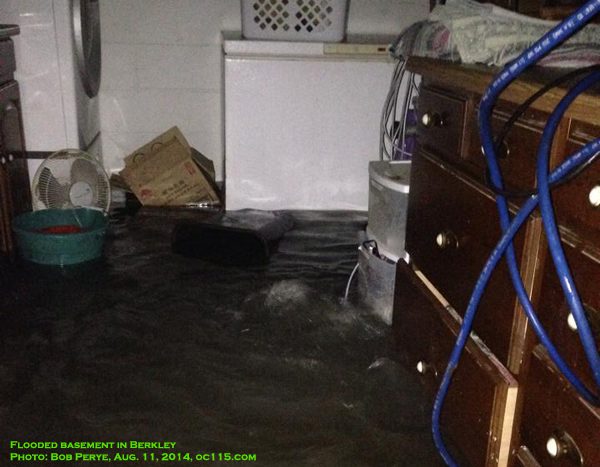 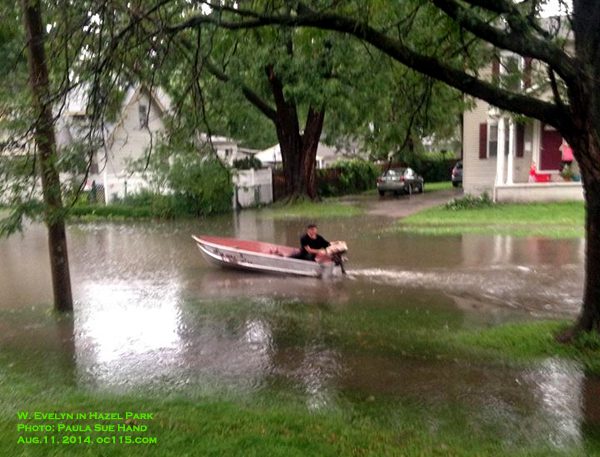 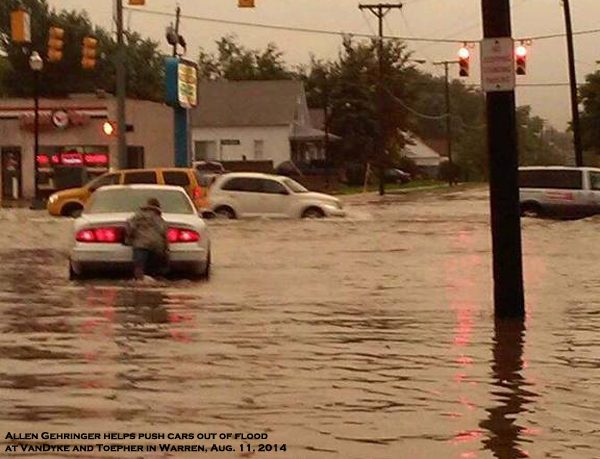 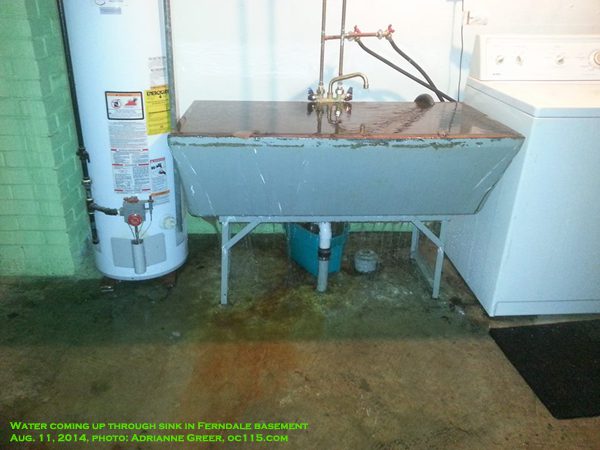 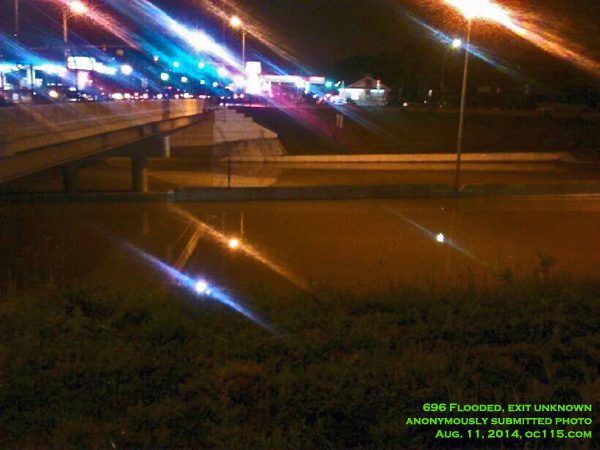