On Tuesday night a doe was fatally struck by at least one vehicle on Woodward Avenue in Pleasant Ridge. Residents are concerned that the doe may have been the mother of a fawn that has also been spotted around the area.
About a month ago, deer sightings became common in South Oakland County, with reports from Pleasant Ridge, Oak Park,

Ferndale and Hazel Park. SEMCOG, the Southeast Michigan Council of Governments studied the prevalence of deer in 2012, finding that in that year alone there were 1683 car-deer accidents in Oakland County, peaking in the fall.
The report says that “rapid development in previously rural areas,” is contributing the increase of deer in suburban areas. Deer population has also increased dramatically over the past 40 years in all areas. Statewide there are four times more deer than in the 1970s, and in SE Michigan, the population

is 10x greater.
Pleasant Ridge City Manager James Breuckman shared information about Tuesday’s deer fatality. “We had one deer get hit along Woodward in Pleasant Ridge last night around 10:30.  Our police report that no cars stopped at the scene of the accident, so the damage to the cars was not great and we have no knowledge of any injuries to the driver(s) of the car(s) that hit the deer,” he said. “Our DPW contractor collected the

carcass and disposed of it.” The deer was hit near the Woodward and Oxford intersection, by the oil change shop.
When asked what the City has done in response to the increased deer sightings, Breuckman said “We did look into options for what to do with the deer, but ultimately we adopted a hands-off policy. This is consistent with how all of our neighboring communities manage deer, as there are problems involved in capturing and transporting

deer, particularly when there is a fawn involved as there is in the deer that have been in PR this spring and summer.
“Further, based on our research, Cities that instituted culling or transplanting programs ended up with no net effect on the number of deer in the City. Deer are wild animals and will go where they can. We did contact Oakland County, the Zoo, the MDNR, and Berkley and none of those organizations relocate deer or recommend relocating deer.”

has information about dealing with urban deer at http://www.bhamgov.org/government/departments/dps/urban_deer_population.php, as does Rochester Hills, at http://www.michigandeercrash.com/RochesterHIlls_2012.pdf. 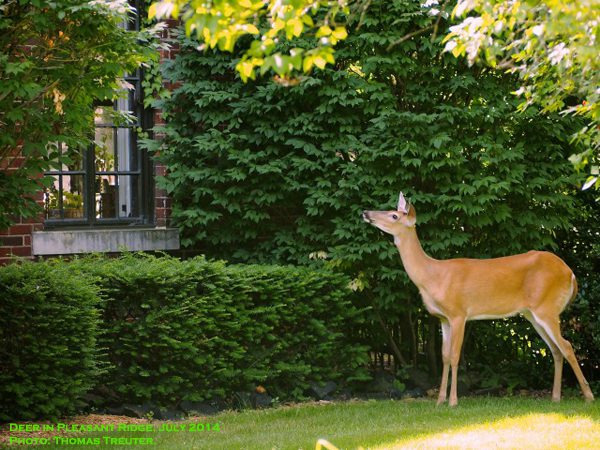