Two people were arrested Thursday around 2pm at the site of Enbridge pipeline construction in Oxford Township in the 1700 block of Lakeville Road. Enbridge is building a pipeline through Addison and Oxford Township, and the arrestees were part of a group protesting the pipeline.
MiCATS, the Michigan Coalition Against Tar Sands, has been organizing against the expansion of drilling and oil pipelines. This week marks the four year anniversary of a pipeline failure in Kalamazoo that devastated the Kalamazoo River in 2010. The pipeline carried tar sand, which is heavy crude oil, from Canada to the

United States. Thirty-five miles of the Kalamazoo were closed for cleaning for two years, and Enbridge was ordered by the Environmental Protection Agency to come back and dredge portions of the river that still contained oil and oil contaminated sediment, according to various reports. Other accidents from oil drilling and transport have made news through the country.
Protesters remembered the anniversary by posting a large sign in front of the pipeline staging site. According to Oakland County Undersheriff Mike McCabe “During the protest two subjects refused to obey several verbal commands to stop blocking traffic. The subjects continued to impede traffic and became argumentative, refusing deputy commands to stop. The

subjects were arrested for disorderly person. The two subjects were transported to the Oakland County Jail and lodged for disorderly person. The remainder of the protesters continued to protest without further incident.”
The arrestees were a 41 year old resident of Chesterton, Indiana and a 31 year old resident of Milford.
A press release by MiCATS quotes an unnamed protester as saying “We are here on the fourth anniversary of the Kalamazoo spill to call out Enbridge for the death and destruction they’ve caused all over the world by exploiting tar sands. Big industry is allowed to operate unchecked at the expense of all living things, so we must provide accountability.”
A status update on the MiCATS Facebook page reads “If anyone wonders why I’m a MiCat… Sitting

handcuffed in the back of a cruiser I have never felt such love for a group of human beings as I did watching the MiCats continue to block the pipeline construction road as they screamed their defiance and support!!! Wicked big smile!”
MiCATS has a history of organizing against the expansion of pipelines going back to at least last year. They are planning a training camp in August for members and those who want to learn more about protesting. More info can be found at http://www.michigancats.org/landing-on-our-feet-summer-action-camp/.
This week Enbridge also drew the attention of the State of Michigan, with Attorney General Bill Schuette and the Department of Environmental Quality ordering them to comply with contract details in regards to their pipeline in the Straits of Mackinac. They found that the pipeline lacks sufficient anchoring. Enbridge is expected to make the necessary repairs within three months.
Join in the conversation at https://www.facebook.com/oc115.
If you are a business or group that supports our work go to https://oaklandcounty115.com/sponsorshipadvertising/.
If you are a reader who wants to see the oc115 thrive, go to https://oaklandcounty115.com/reader-support/. 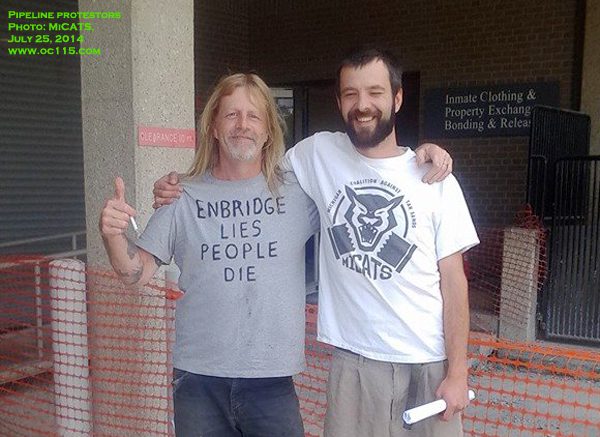