The creative minds at Ferndale-based i3Detroit are once again showing off the importance of innovation as they take part in the 72-hour Red Bull Creation contest. The competition was moved from Brooklyn, NY to

Detroit this year and participants were given the surprise task of turning unwanted items into artwork. Red Bull has taken over the Recycle Here! facility 1331 Holden in Detroit for the challenge.
Seven teams are competing. After the 72-hour live build concludes, the creations will move to a public exhibition area in the Eastern Market on Saturday, July 12, for judging. This year’s judges include Caleb Kraft (Community editor for Make Magazine), Mike Szczys (managing editor of Hackaday.com) and Greg Needle (Director of the Innovation Gymnasium at the Lyle School of Engineering at Southern Methodist University in Dallas, Texas).
i3Detroit’s 2014 team is composed of Ken Siegner, Marie-Therese Enga, Sean Denny, and Ted Hansen. 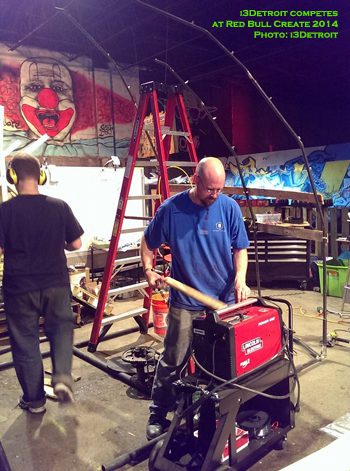 i3Detroit had participants in the event’s debut competition back in 2011 in New York.
i3Detroit Board Member Nathaniel Bezanson, who was on the team in 2011, was excited to hear of the competition coming to Detroit, and is rooting fellow club members on. “It’s welcome news,” he said. “This has always been the place where people come to make things. It’s obvious (to me, at least) that where talented, creative people make amazing things for work, those same people will also make amazing things for play.

It’s why we started i3Detroit, and having the finals of a nationwide engineering creativity contest right in our backyard feels good!
“On a personal level, we’re delighted to have the out-of-town teams coming to our neck of the woods, since while they’re worthy competitors, they’re also kindred spirits, and I expect the whole lot to get along famously once the competition clock is up.”
i3Detroit is a hackerspace. Essentially it’s a co-op for people who like to make things. The membership-based nonprofit is housed in the industrial part of Ferndale, and members share equipment and knowledge. There are expensive items like

laser cutters, saws, welding equipment, presses, etc. that members could not afford to buy on their own. There is also a well-stocked electronics parts department so members do not need to rush off to buy basis like wiring and hardware.
There are about 150 members. Bezanson has been there from the beginning. “It’s been successful beyond our wildest dreams back in the coffee-shop meetings and garage build-sessions five summers ago, and more than just growing in numbers, we’ve matured tremendously as a group and as an organization. It’s not without its challenges, but the payoff of being part of this group is simply beyond words. It’s like a family, but one composed mostly of kind-but-overachieving siblings and crazy aunts and uncles,” he said.

Once the judging is over, oc115.com will bring news of the competition results and show off i3Detroit’s project. In the meantime, watch this video from early in the competition:

Learn more about the Red Bull Creation Challenge at http://creation.redbullusa.com/.