Ferndale’s electric car charging stations were replaced last month after Blink Network, the company behind the system, declared bankruptcy. The new stations are managed by Clipper Creek through a partnership with DTE and came at no new cost to the city.
According to Joe Gacioch, Ferndale’s Chief Innovation Officer, “The City requested the Clipper Creek model

because they have a proven field history of ten years and are compatible with all leading models of electric vehicles.  From an operations perspective, Clipper Creek was desirable because it can interface with the City’s LUKE II pay station network and Park Mobile.”
Locally, Clipper Creek products are installed at the Wayne County Airport in both garages, Oakland Airport, Dearborn parking garage, Radisson Hotel in Bloomfield Hills, six of Ann Arbor’s public parking garages, Lawrence Tech, and various other sites.  Clipper Creek is one of the highest-volume manufacturers of EV charging stations in the world and are a Tier 2 supplier to all General Motors EV’s worldwide.

Over the next few months, the City will work with Republic Parking to coordinate the installation of a software called PowerDash.  PowerDash enables the electric vehicle charge stations to yield important data such as activity and energy consumption reports as well as costs/kwh reports.  This installation package also has an app for iOS and Android devices that allows users to see the location of our charging stations and whether they are available or not.  An example of the PowerDash tracking abilities can be found on the Ann Arbor DDA website here: http://a2ev.powerdash.com/home/
“We are all about everything being connected.  Clipper Creek and PowerDash will help the public pay for and discover available charging sessions in one place.  The usage data generated by the software will help

the city better understand the demand and energy consumption data that would inform considerations of future EVSE investment that could accompany long term parking expansion plans,” Gacioch.
The Electric Vehicle charging stations are located in the Withington Lot and the Library Parking Lot. These locations are only meant for electric vehicles. A non-electric vehicle can be charged a $35 prohibited parking ticket for occupying a space signed and dedicated for electric vehicles. It is unclear how often the spaces are used, since DTE previously controlled the usage data. Gacioch said the new system will allow the City to track usage, which is expected to increase as hybrids become more common.
“Continued investment in sustainable and future-centric technology continues to be a priority for City

Council. Leading automotive companies such as GM, Ford, BMW, Toyota, and new niche companies such as Tesla continue to invest in electric and fuel efficient vehicles. The introduction and expansion of these models will impact the infrastructure needs of a rapidly growing market demand, and Ferndale hopes to be prepared to handle this shift age with grace,” Gacioch said.
The original stations were approved by City Council in 2011. Over the past few years Ferndale has come up with changes to the parking system, some more welcome than others. They’ve eliminated the need for quarters by installing multi-space units and the ability to pay for parking with a cell phone app called Parkmobile. Plans are currently in the works for a development that incorporates retail, office, residential and parking in Downtown Ferndale. 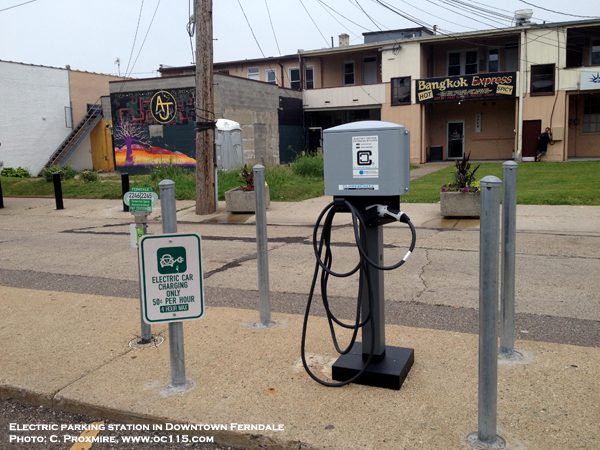 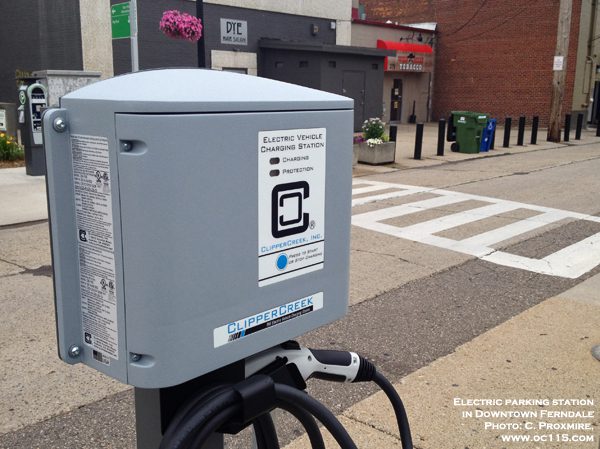