After a decade of service on the City Council, Jan Parisi was sworn in on June 24 as Mayor of Hazel Park.

Parisi had been serving as Mayor Pro Tem until Jack Lloyd resigned due to health problems earlier this month. Parisi is Hazel Park’s first female mayor. Judge Charles Goedert administered the oath of office in front of a room

full of supporters at the City Council meeting.
Parisi is known for having co-founded the Hazel Park Neighborhood Enrichment Committee and the Marketing Action Team, and also as past President of the Hazel Park Lions Club. By day she is an office manager in the healthcare industry.
City Attorney Arnold J. Shifman was among those who praised Parisi’s appointment. “I have never seen an individual who loves the city more than you,” he said. “And I know that every possible person, every person I ever talked to, if everybody had the same love of the city that you do there is no stopping this city in the future.

Growth, prosperity, it’s going forward. You epitomize what people should exhibit… We could have the worst unfortunate incident and you’ve got your smile… I know you’re going to do a great job.”
Parisi said she’d wanted to go into politics since the ninth grade when a civics teacher had taken her to a campaign headquarters. “I’m loving this,” she said. “From looking out there obviously many people out there love Hazel Park also. I walk around

all the time and [see] all these people I know. And I love all of you too. You’re all good people, and we’re going to do really good.”
Councilperson Michael Webb welcomed Parisi to the Mayor’s seat as well. “We have to work together to raise the children of this community, to further our community. And I think all of us up here hat that goal in mind. With the new Mayor, I think we have some new advantages and different outlooks. There’s going to be some things that we see come to a head so we will plan for the worst and hope for the best.”

Stepping into the Mayor Pro Tem position was Councilperson Jeff Keaton. Keaton served as Mayor from 1991-1995.
There will be a celebration for Jack Lloyd at the Hazel Park Viking Arena June 28 at 1:00-5:00 for his Service of being the Mayor and Council-member for 25 years.
To learn more about the City of Hazel Park visit their website at http://www.hazelpark.org/.
Related story:
http://oaklandcounty115.com/2014/06/11/hazel-park-mayor-jack-f-lloyd-resigns/ 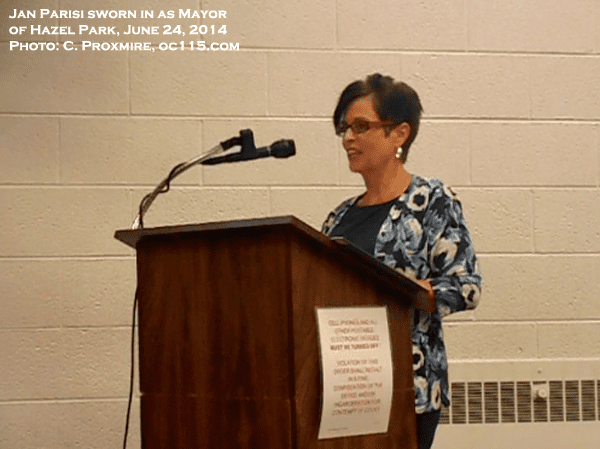