(Crystal A. Proxmire, June 19, 2014)
A dispute over a federal housing voucher policy had protesters marching in front of the Withington Apartments on Wednesday evening, claiming racial discrimination against the Ferndale Housing Commission. The Ferndale Housing Commission is headquartered in Ferndale, although the Section 8 program through HUD offers vouchers that can be used in Wayne, Oakland or Macomb.
Charmonique Hopkins, a mother of four living on Desoto in Detroit (near Livernois and Fenkell)  has received a housing voucher through the Commission for six years. Within the past year the house across from her was abandoned and boarded up. According to Deborah Wilson, Director of the Ferndale Housing Commission, HUD  requires recipients of the vouchers to reside in a house that is not bordered

up by any vacant, boarded up homes. When Hopkins’ inspection time came, the commission learned of the abandoned home and informed her that the property no longer qualified for the voucher. She would either have to move, or stop receiving the assistance.
The house Hopkins’ rents is seven years old, and there are multiple homes in her neighborhood that are the same age. Her home was not inspected since the home across the street being boarded up automatically disqualifies her from the program. Her rent, paid for by the voucher, is $572 a month for a four bedroom home with two and a half baths and the water bill included. 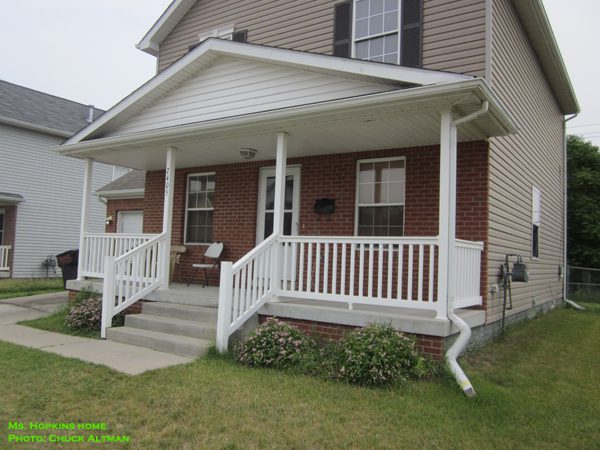 Hopkins does not want to move, and has sought help from a group called Detroit Eviction Defense, a nonprofit that advocates on behalf of renters and homeowners who are in danger of losing their homes due to circumstances like predatory lending or discrimination.

Attorney Bob Day is representing Hopkins. “They’re supposed to do an annual inspection of the rental house, the idea being that the landlord has got to keep the place in good shape. Like I said, Ms. Hopkins lives in a new construction in Detroit, A very nice house, no problems. And they didn’t even come and look at her house. They just drove around the neighborhood and said that the next block over there was an apartment building it was boarded up and that was the reason she failed the inspection,” Day said. “So to us, by that reasoning, they’re going to fail everybody in Detroit basically, because everyplace you go in Detroit, you might have a nice house on nice block, but then you’ve got a torn up house two blocks over, right?”
Day later told other picketers, “The only thing I can figure is that they don’t want their inspectors and workers to have to be driving around in Detroit.”
Wilson said that claims of racism were “not true at all.” She explained that the Section 8 Housing program gives people the option of living anywhere in Wayne, Oakland or Macomb Counties. The housing vouchers

come from HUD, and fall under HUD regulations.
“The reason for the policy is to make sure families are living in safe secure properties,” Wilson said. “The reason is that studies show abandoned houses can bring more crime, and drugs and it makes a more dangerous environment for the kids.” The policy is that families in the program cannot live next to homes that are boarded up.
“There are many nice neighborhoods in Detroit. The idea that there is an abandoned house on every block like they say is insulting. And if we were racist we would not care about making sure people had a safe place to live.”
HUD requires the Commission to do “fair housing audits” each year to ensure that participants are not being taken advantage of by their landlords and that they are living in safe situations.
Participants in the program can live anywhere in the tri county area, except in homes boarded by blight. In Hopkin’s case, she’d been a client for at least six years without incident, and she stated that the home across the street had been boarded up within the past year. 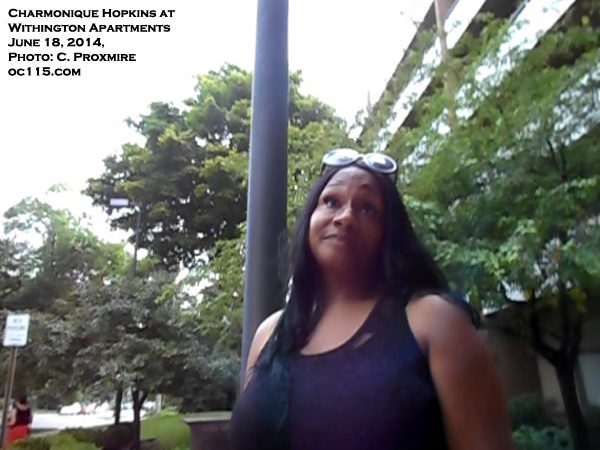 The Section 8 program administered by the Ferndale Housing Commission serves 772 families. Wilson said that 40% of those families live in Wayne County, and all but five of them live in Detroit. She said 46% live in Oakland and 14% live in Macomb. Of the families they serve, 73% are African American.

When asked about their track record in terms of racism, Wilson said that in her 30 years of being with the commission they had never been sued for discrimination. She said that complaints are rare, and that when people have made claims in the past “they were inspected by HUD or the US Department of Civil Rights and they have always vindicated us.”
In addition to administering the Section 8 voucher program, the Ferndale Housing Commission’s main task is a public housing program that is limited to the Ferndale city limits. This includes two elderly housing facilities, Autumn House and Withington West.

There are also scattered houses through the city that are owned and managed by the Commission, including 15 two bedroom, 21 three bedroom, and 7 four bedroom homes for low income families.
In this program, 90% of the residents are minorities.
“Helping all people is our job on a day to day basis, that is what we are here for,” Wilson said.
About a dozen people came Wednesday to picket. Signs had sayings like “Keep Ms. Hopkins in her home,” “Stop Racist Attacks,” and “Ferndale Housing is Racist.” The picketers who came as part of Detroit Eviction Defense admitted that they did not know of any other situations of discrimination through the Commission.
They handed out fliers in front of Withington and along 9 Mile stating “Ferndale Housing Commission uses our tax dollars to follow an agenda of racism and attacks on the people and the neighborhoods of Detroit. With the people of Detroit under siege on all sides from the politicians, to the emergency manager, to the courts, we cannot allow the racist Ferndale Housing Commission to open yet another round of attacks on the people of Detroit.” 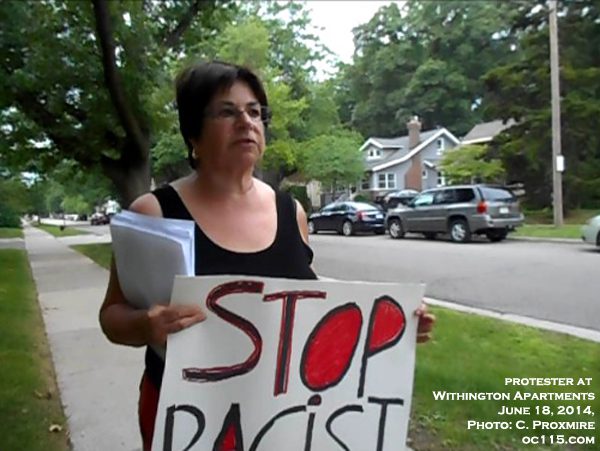 Jan Pickens of Southfield walked up and down Withington with a sign saying “Stop Racist Attacks.” When asked why she thought the Housing Commission was racist she said “Well to refuse a voucher on the basis there’s an abandoned house down the street, that sounds to me like where in Detroit would you accept somebody to live? So if you’re not going to give a

voucher to anybody in Detroit or trying to live in Detroit, to me that sounds racist.” Pickens said she’d not heard of any other incidents through the Ferndale Housing Commission, but that she has picked before with Detroit Eviction Defense.
The Ferndale Housing Commission has granted Hopkins a 90 day extension to give her time to move into a qualifying home. They will continue to provide her with a voucher if she moves, and she can go anywhere in Wayne, Oakland or Macomb counties that meets the requirements of the program. Hopkins said she does not want to move and will continue to fight. “They are very prejudiced,” she said.

Day also stood firm. “Our position on this, until they can explain something different, is that this is a racist policy. This is a policy that’s attacking people of color, and people in Detroit, and basically saying they aren’t going to approve anybody to live in Detroit and that’s baloney.”
For more information on Ferndale Housing Commission visit their website at http://ferndalehousing.com.
For more on Detroit Eviction Defense visit http://detroitevictiondefense.org. 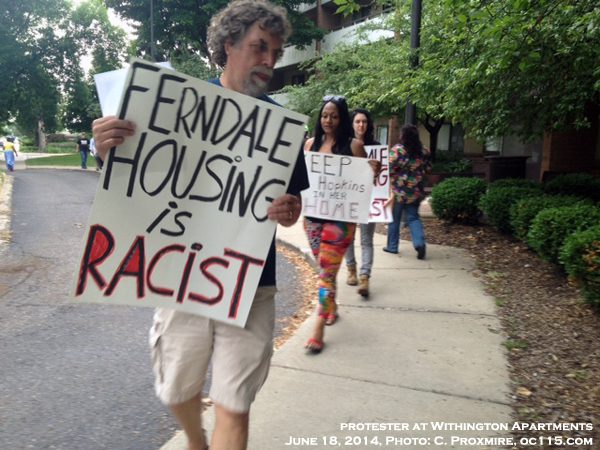 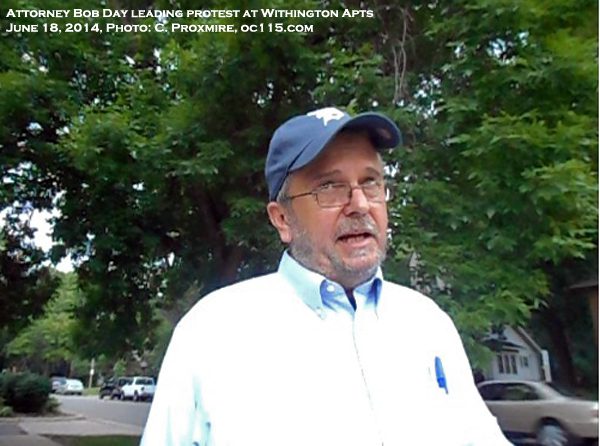 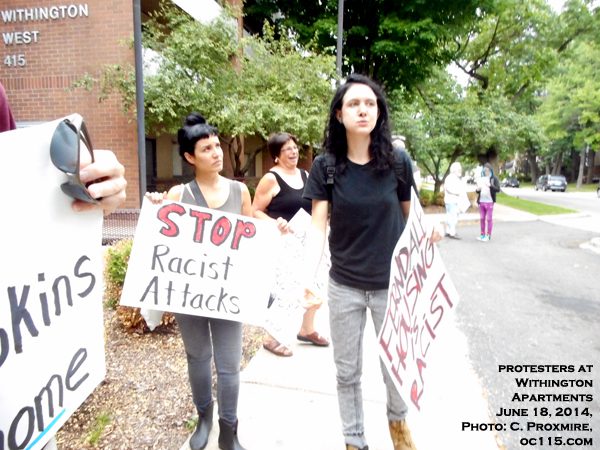