(Jillian Bogater, orig. Chicken Scratch Fever,  June 17, 2014)
BACKGROUND: Jillian Bogater and Matt Greenberg are cooped up in Ferndale, which in 2012 legalized backyard chickens. This is their first time urban farming with hens. Jillian, a professional journalist, and

Matt, a brownfield redevelopment consultant, added three chicks to their household in Spring 2014. On March 17 they picked up a Black French Copper Marans, a Dominique and an Olive Egger from a hatchery in Ohio. They have built a Detroit-style Wichita Cabin Coop, which passed inspection in January. Their full journey is chronicled on chickenscratchfever.com. Selected posts will be here on oc115!
Tap-tap-Tap!
Startled, I looked down at my feet to see Nellie pecking away at my turquoise gardening shoe.
I know chickens are attracted to the color red. In fact, their feeder and waterer are red, and I’ve had more than one chicken peck at my painted toenails when I’m barefoot.
But turquoise? Apparently Nellie has an affinity for that color. I’ve even caught her hopping up trying to peck at the turquoise part of the tablecloth out back.

With each new day, the girls’ personalities are busting out. Nellie remains the most friendly, even if she constantly pecks at my feet. She allows me to pick her up, and she’s quite the snuggle bunny. Somehow that makes up for her uninvited pinches.
Nellie likes to cuddle with the other chickens, too. In fact, if Gigi or Loretta lay down in a sunbeam, Nellie

will walk in close and lay down right on top of them. The girls usually will humor Nellie — for a moment — before giving her the boot.
Gigi (our Olive Egger) loves a dust bath. One moment she’s walking along, then suddenly she’ll drop to the ground and start kicking dirt everywhere. The first time Charlie saw this, he ran over to her all concerned. He shoved his nose in her butt, hoping to revive her. Gigi looked up at him, kicked some sand in his face, then continued bathing. Can’t a girl get some privacy?
And our Marans chicken Loretta seems to be warming up to people. A few days ago I crouched down low (no easy feat!) to take a few pictures of her. Loretta walked up close. Real close. As she quizzically checked out my hands, I snapped away. Then BAM! She bit my finger! My hands must have looked like a handful of meaty grubs. It startled me more than anything, and in the end, I was grateful for my first interaction with Loretta on her terms.
Read Part #1 here – http://oaklandcounty115.com/2014/04/01/the-life-of-ferndale-chickens-1-the-babies-are-home-2/.
Read Part #2 here – http://oaklandcounty115.com/2014/04/09/the-life-of-ferndale-chickens-2-field-trip/
Read Part #3 here – http://oaklandcounty115.com/2014/04/17/the-life-of-ferndale-chickens-3-chicken-acrobatics/
Read Part #4 here – http://oaklandcounty115.com/2014/05/06/the-life-of-ferndale-chickens-4-week-sixfreedom/ 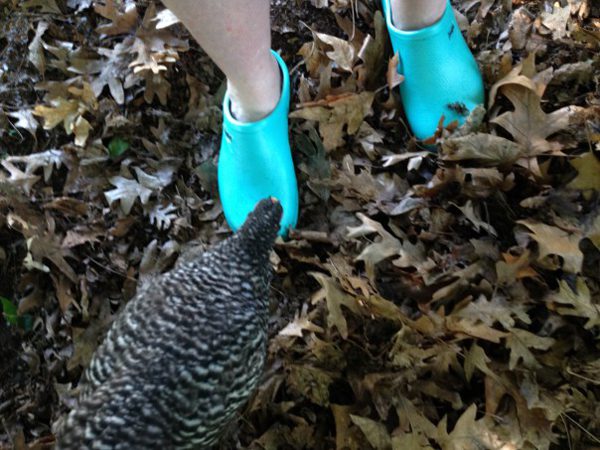