(Detroit Zoo Press Release, June 17, 2014)
Detroit Zoological Society (DZS) board members, donors, staff and guests gathered at the Detroit Zoo this evening to ceremoniously “break the ice” on the Polk Penguin Conservation Center (PPCC). The groundbreaking event marks the beginning of an 18-month development period for the largest project the Zoo has ever undertaken.
DZS Executive Director and CEO Ron Kagan and Vice Chairman Stephen Polk – whose family donated the

$10 million lead gift for the project – swung ice axes at a wall of ice, which shattered on impact to reveal an ice-carved rendering of the PPCC.
“We are thrilled to be moving forward with our plans for this amazing place for people and penguins that will be centered on conservation. It will be an extraordinary and unique experience for our guests,” said Kagan.
Inspired by Sir Ernest Shackleton’s legendary Antarctic expeditions and epic crossings of the Drake Passage, the facility’s dramatic exterior design suggests a tabular iceberg with a crevasse and waterfall. The interior experience will feature effects such as arctic blasts, iceberg “calving”, waves and snow – evoking the harsh and visceral ice world of Antarctica. The entry plaza will include a water feature that will be a splash area in the summer and a skating rink in winter.
Kagan, Polk and other DZS leaders visited Antarctica to gain firsthand knowledge of and immersion in the Antarctic environment in order to bring the authentic polar experience from concept to reality. In

addition, world-renowned polar ecologist and penguin expert Dr. Bill Fraser – who gave a talk on penguins and the impact of climate change at the Detroit Zoo’s Ford Education Center following the ceremony – served as a design consultant on the project.
One of the most dramatic features of the $29.5-million, 33,000-square-foot facility will be a penguin “deep dive” with views above and below water as the birds dive and soar through a chilled 326,000-gallon, 25-foot-deep aquatic area. That feature, deeper and larger than the aquatic area at the Zoo’s Arctic Ring of

Life, will allow visitors to observe penguins as they deep-water dive – something that is almost impossible to see, even in the wild.
The PPCC will be home to about 80 penguins of four species: rockhopper, macaroni and king – which currently reside in the Detroit Zoo’s original Penguinarium – as well as gentoo, a species which will be new to the Zoo. The habitat will ensure an optimal environment for the penguins’ welfare and encourage wild behavior, from diving and porpoising to nesting and rearing young.
The DZS also unveiled an official penguin mascot that joins Junior Z and the Zooper Heroes, costumed characters that greet visitors at Detroit Zoo events. The penguin joins two Junior Z zookeeper mascots and the cape-wearing polar bear and giraffe Zooper Heroes.
The PPCC was designed by Jones & Jones – architects of Disney’s Animal Kingdom as well as the Detroit Zoo’s Arctic Ring of Life and National Amphibian Conservation Center – and by Albert Kahn Associates, architects of the Zoo’s Ruth Roby Glancy Animal Health Complex. DeMaria/Wharton-Smith has been named

general contractor on the project. The facility will be built on a 2-acre site just inside the Zoo’s entrance and is slated to open in late 2015.
More than 100 design, engineering and construction jobs will be created and sustained for the development period of the PPCC. With an associated annual increase of about 250,000 visitors, it is estimated that the Detroit Zoo’s revenue will increase by at least $2 million annually. The new attraction is expected to have a regional economic impact of as much as $10 million dollars per year, adding to the current $100-million economic impact the Zoo already has on the region.

In addition to the $10-million grant from the Polk Family Fund – the largest gift in the history of the DZS – the William Davidson Foundation Fund has committed $3 million toward the development of the PPCC. Twelve gifts of $100,000 or more have set the pace for contributions from individuals and corporate and family foundations. The DZS Board has committed $8.5 million, bringing funds secured for the landmark project to $25.2 million and leaving $4.3 million yet to be raised.
For more information or to make a philanthropic investment in the Polk Penguin Conservation Center, visit http://dzoo.org/pcc.
The Detroit Zoological Society is a nonprofit organization that operates the Detroit Zoo and Belle Isle Nature Zoo. Situated on 125 acres of naturalistic habitats, the Detroit Zoo is located at 10 Mile Road and Woodward Avenue off I-696 in Royal Oak, Mich. The Detroit Zoo is open 362 days a year, 9 a.m. to 5 p.m.

April through Labor Day (with extended hours until 8 p.m. Wednesdays during July and August), 10 a.m. to 5 p.m. the day after Labor Day through October and 10 a.m. to 4 p.m. November through March. Admission is $14 for adults 15 to 61 and $10 for children 2 to 14, senior citizens 62 and older and active military with ID; children under 2 are admitted free. The Belle Isle Nature Zoo is open Wednesday through Sunday 10 a.m. to 5 p.m. April through October and 10 a.m. to 4 p.m. November through March; closed Mondays and Tuesdays. Admission is to the Nature Zoo is free; however, a State of Michigan Recreation Passport is required for all personal vehicles to enter Belle Isle. For more information, call (248) 541-5717 or visit www.detroitzoo.org. 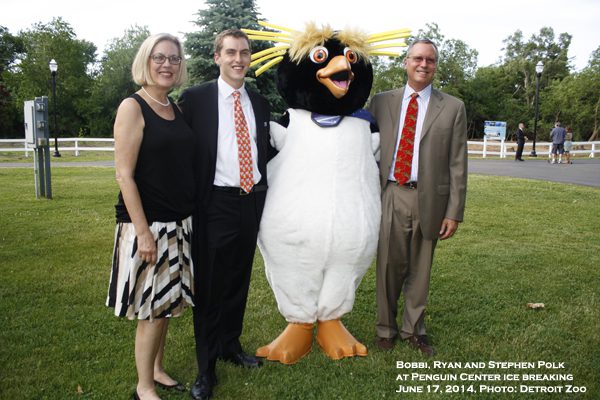