(C. Proxmire, May 14, 2014)
Linda Grand, DLC Teacher and Advisor to DLC Student Council, was teary-eyed while she watched two of her students receive awards at the recent Ferndale Youth Assistance Recognition Awards. “It as a wonderful program and well done,” she said, adding that she “appreciated being part of it.”
Demarco Harris won an individual award and one on behalf of DLC Student Council. He said that he “loved it,” and was “waiting on it all week.” He was “excited,” to be recognized and it was “as much as I hoped it

would be.” He was surprised to see his name on the individual list because he thought he was just going to be the representative for the group nomination.
Ferndale Middle School Principal Dawn Warren was the Master of Ceremonies announced the recipients’ names and read the descriptions for why they were nominated as FYA Office Manager Melinda Hicks assisted in handing out the awards. Youth were recognized for their good citizenship, and progress made in Youth Assistance Programs. Judge Joe Longo and Oakland County Youth Assistance Supervisor also shared their remarks with the families and community members present.
Youth Assistance aims to “strengthen youth and families in order to prevent delinquency, abuse and neglect through community involvement,” with offices throughout Oakland County. In 2013 for Ferndale, there were 194 open cases for casework services.

The group honors students each year, and they give out scholarships to help fund extracurricular activities.  Service is to families in the Ferndale School District, which includes Pleasant Ridge, Oak Park and Royal Oak Township as well as Ferndale.
“Through our Camp Scholarship Program, in 2013 we sent 17 children to an overnight camp, 22 children to day camp, 2 children to Tim Horton’s Camp, and 1 child went to a specialty camp for children with special needs,” said Caseworker Lauren Klos.
The group also hosts a variety of family education programs throughout the school year. “This past year we had parent/community workshops that addressed bullying, ADHD, Love and Logic parenting, and Cyber Safety. We also partnered with Ferndale High School to host two viewings of the documentary “Miss Representation,” which is a film about how women are misrepresented in the media and in society; these viewings were made possible by the Ferndale Education Foundation.
“A new 4-week program called, “Girls Stand Strong,” was introduced this past spring for girls in 4-6th grades,

which is an empowering anti-bullying program where girls learn how to effectively stand up to bullies, avoid becoming a bully, learn how to cope with emotions, and learn about finding and being a good friend. The Girls Stand Strong program was made possible by partnering with Coolidge Intermediate School and Kennedy Elementary School,” Klos said. There are also two “safe nights” that bring up to 300 kids together for a night of fun and education against drug and alcohol use.
FYA Board Chairperson Craig Covey gave the closing remarks, saying “Thanks for doing the good work – life is better when you help other people.”
Ann Redwine, caregiver for student Mckayla Griffin, said it was “awesome and I enjoyed it. I was speechless when I saw her (McKayla) up there. [This award] makes her [McKayla] feel good and it makes me feel good.”
Markell McCoy, who earned an individual award, stated, “It felt good to get noticed for doing something good and get recognized for helping others.” He said it was “nerve racking but an honor” to stand up there and be recognized. He is a tri-athlete (football, track, and swim), is looking into being nominated for Vice President of National Honor Society, and is considering running for class president next year. He is also

involved with a mentoring program where they work with 3rd graders from the local elementary schools.
McCoy’s Parents Marlo and DC stated that they are “very proud [of Markell]. He has always been a good kid and it’s good to have someone recognize him and the good things he does.”
Congratulations to the following recipients:
Abigail Black
Kaelynn Blair
Steven Bond
Shariyelle Borden
Nathaniel Brisson-Fast
Kyle Durant 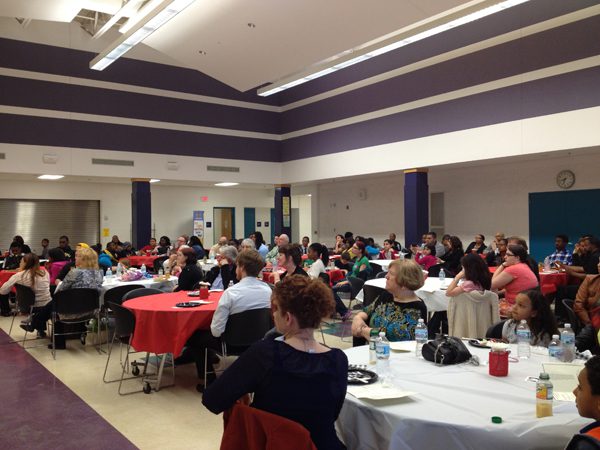 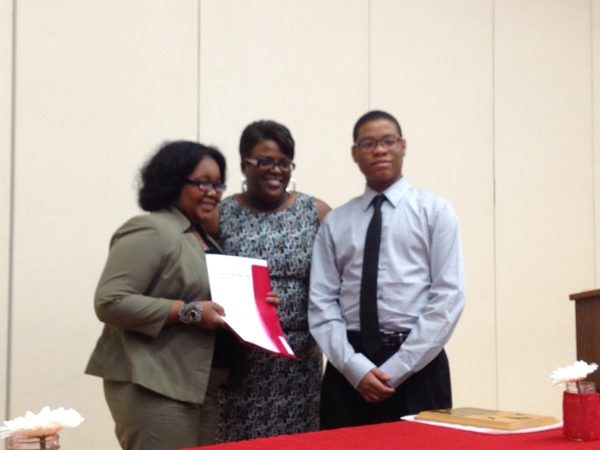