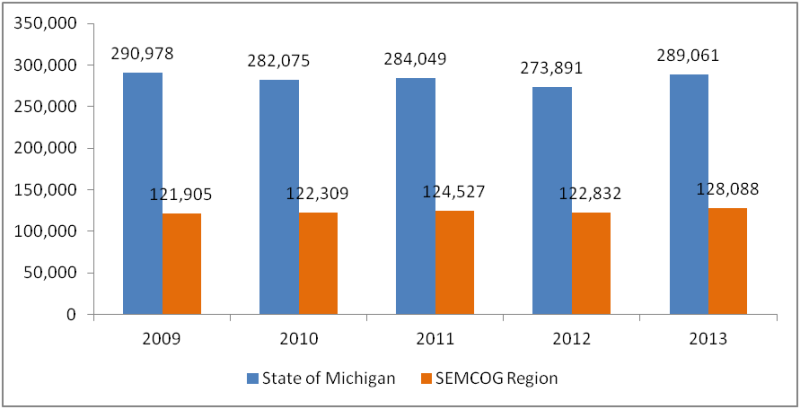 While crashes involving bicyclists in Southeast Michigan remained the same, these crashes increased across the state. Crashes

involving pedestrians increased in both the region and state.
Ten years of traffic crash data (2003-2013) are available through interactive databases and mapping applications on SEMCOG’s website.
“As the weather starts to warm, more people will be driving, riding bikes, and walking,” notes SEMCOG Executive Director, Kathleen Lomako. “These statistics are a reminder that we all need to be vigilant.”
A safe transportation system helps maximize the movement of people and goods. SEMCOG works with various safety partners to improve traffic safety by increasing education and enforcement. With that in

SEMCOG is the only organization in Southeast Michigan that brings together all governments to solve regional challenges and enhance the quality of life for the seven-county region’s 4.7 million people.

Affirmations: A Safe Space for Community, Services, and Support in Downtown Ferndale
August 8, 2022

Reminder: DNR Auctioning Off Properties Across the State, Including Lakefront Lots
August 8, 2022

Hazel Park Residents Can Sign up for Alerts Through Nixle
August 7, 2022
Search Our Site