“What you’re looking at and listening to is a blueprint of your new city,” said emcee Paula Tutman as she introduced Pontiac’s first female Mayor for her inaugural State of the City Address on Wednesday. Along with Mayor Deirdre Waterman, heads of several transitional committees spoke about progress their groups have made in the past four months in moving the city forward.
Waterman, an optometrist by trade, was elected Mayor in November. However due to Pontiac being under

emergency management by the state, she has had to fight tooth and nail for the information and power to be able to do her job.
Her speech was not only about those struggles but also the ways members of the community have come together to set goals and make progress towards independence and revitalization.
“We’ve had enough acrimony and infighting for so many years,” Waterman said. “I didn’t want that to any more labor our development. We couldn’t move forward with that kind of spirit.”
Immediately upon taking office she created Mayoral Transition Committees to address specific areas for growth, tasking each with coming up with long term and short term goals. Each committee had to

demonstrate progress by April, and they have.
The Rebranding Committee came up with “Discover the Spirit of Pontiac” as the city’s theme. Symbolized by a golden phoenix rising from the ashes, the Spirit of Pontiac is about economic growth and community building. The logo they created, along with the mission statement and objectives, will tie together the work of the other committees.
The Economic Development Committee has worked to make Pontiac” one-stop” ready, meaning that department heads and employees have been trained to be welcoming to business owners that want to come to the city. This committee has also launched an online business directory, and is in the process of selling ads in order to pay for a print edition that will go to every home in Pontiac, with a message of Pontiac pride

and the importance of shopping locally.
The Workforce Development Committee is tasked with reducing unemployment. Currently Pontiac has 20% unemployment, with rates as high as 40% for minority segments of the population. Tackling the problem with small steps is making the task less daunting. The committee started in an area where funding was identified, and focused on a program that puts older adults through training, subsidized employment, and job placement.
The Public-Private Partnerships Committee has specifically looked for corporate support and partnerships, and created The Spirit of Pontiac Foundation and the Pontiac United Fund as vehicles for supporting community-improvement projects.
The Human Services Committee put their first focus into reducing obesity. The Senior Services Committee has conducted a survey of senior services and identified opportunities to serve seniors better.

They’ve worked with SMART Transportation to increase awareness about senior shuttle services, and they’ve increased BINGO games. The Youth Development Committee is putting together an expo to showcase multiple opportunities for young people in Pontiac, coordinating with the schools, multiple nonprofits and city departments. The Get Out the Vote Committee is aiming to increase citizen participation with non-partisan outreach and a goal of 40% voter turnout in the November election. Lastly Empowering Neighborhood Associations Committee has worked to encourage council members and neighborhood groups to create their own opportunities to build community.
Waterman touted improved relationships with the council, the state and the county. Oakland County has

been providing police services and reduced the amount of crime, taking Pontiac from the 4th most dangerous city to the 85th. The County has also been a partner in economic development.
Pontiac is still under state management, but working towards independence. Waterman announced that the state would be recommending that some of the powers traditionally given to mayors be returned, including the ability to negotiate contracts and do budgeting. One problem, however, is that after five years of emergency management, the state is leaving Pontiac with structural deficits in the millions of dollars. Although Waterman and her team has created a balanced operating budget for 2014-15, the deficits which start in 2015-16 are an impossible amount to overcome. The Mayor hopes to get the state to address these debts.
She also noted that most of the municipal jobs in Pontiac have been eliminated and outsourced. “At one time the City of Pontiac had 800 employees, today we operate with 20,” she said.

The State of the City address was held at the Centerpoint Marriott, with a crowd of over 200 cheering on the city’s progress. There was no budget at all for the event, with private sponsorships making it possible.
“We’re still standing,” Mayor Waterman told the crowd. “We continue to prosper, and we’re beautiful.”
To learn more about Pontiac, visit the city’s official website at http://www.pontiac.mi.us/.
For stories on other State of the City addresses in Oakland County, see: 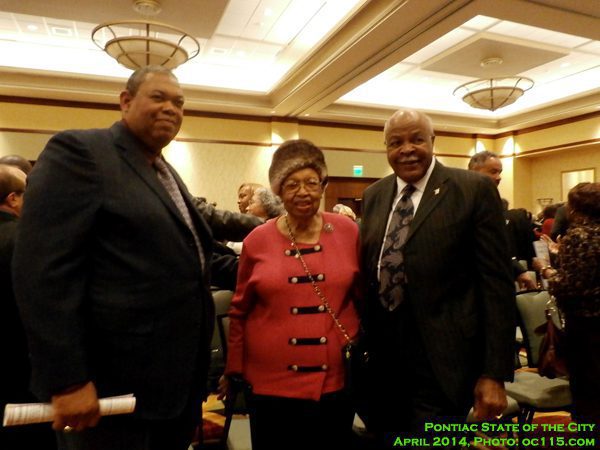 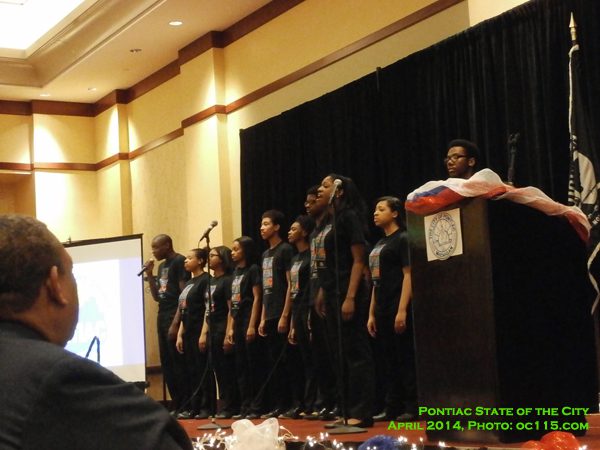 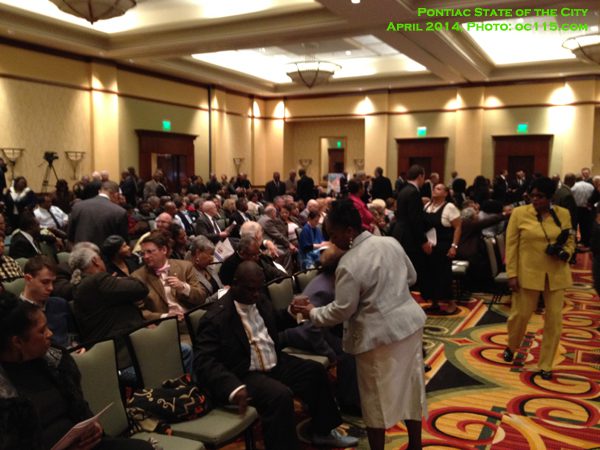 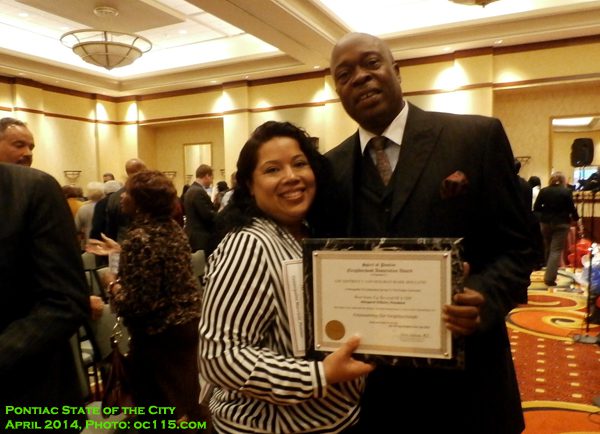