Hazel Park Pot Petition Gets Start, Other Cities Too

Hazel Park Pot Petition Gets Start, Other Cities Too

(Crystal A. Proxmire, April 9, 2014)
The push is on to spread marijuana decriminalization ordinances to as many municipalities as possible, with Oak Park and Hazel Park among those likely to have initiatives on the ballot for the August primary.
Hazel Park City Councilperson Andy LeCureaux was the first to sign the petition in Hazel Park, where petitioners only need 51 signatures to get it on the ballot due to low voter turnout in the most recent

Mayoral election.  “It’s a matter of personal freedom,” LeCureaux said.  Mayor Jack Lloyd also was one of the first to sign.
If passed, the proposal would change the local ordnance to allow people over age 21 to have less than an ounce of marijuana on their own private property. The ballot language is slightly different than in Ferndale, where the recently passed proposal stated “private property,” and the issue of what that meant was brought up in debates on the issue.
Ferndale’s proposal passed with more than 2/3 of the votes.  However proposals like this are largely symbolic since people with marijuana can still be charged under state and federal laws.
“The reason we do these is so that the more  we have the more it lets the state know that this is what the people want,” said Andrew Cisssell, who is working with the Safer Michigan Coalition on ordinances in

multiple cities.  Cissell is also a candidate for State Representative for the 27th District, and someone in the midst of legal troubles tied to marijuana sales and a recent conviction of making a false statement on a petition.
Cissell, who lives in Oak Park, spoke to the Hazel Park City Council on Tuesday to launch the petition drive.  “We feel Hazel Park is a sister city to Ferndale and Oak Park,” he said.  “We’re all very liberal and democratic… I think Hazel Park can set the precedent for the rest of the state.”
Ferndale resident Debra Young is also working on multiple Safer Michigan campaigns. She said that the goal is to collect at least 100 signatures in Hazel Park.  In Oak Park they have already gathered the

required 1,200 signatures but they are continuing until they reach 1,800.
Other communities likely to have ballot questions include Saginaw, Mt. Pleasant, E. Lansing, Lapeer, Utica, Port Huron, Clare, Onaway, Harrison and Benzie County.  Young said that Pleasant Ridge and Huntington Woods are also possibilities for the near future.
Information on the Safer Michigan coalition can be found on their Facebook page at https://www.facebook.com/repealtoday.
For previous stories see:
http://oaklandcounty115.com/2014/04/08/cissell-gets-probation-suspended-jail-time-in-false-statement-case-video/ 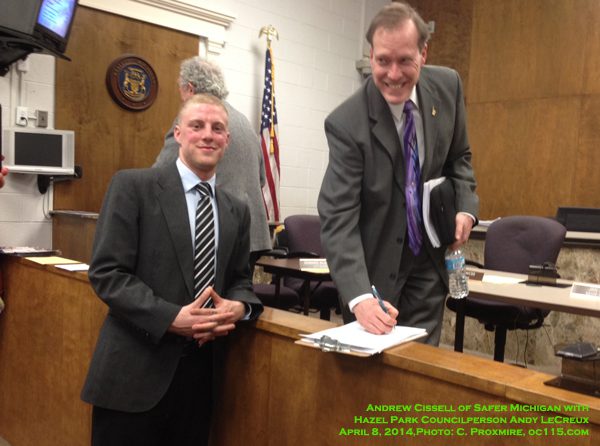