(Crystal A. Proxmire, Feb. 10, 2014)
Water bills will be a little smaller later in the year for Ferndale residents and businesses, as City Council has approved a 10% rate and fee reduction starting July 1.  The move comes after months of evaluating the water fund and system, including comparisons with other communities.
A 2012 comparison with other communities showed that Ferndale was among the highest of those who responded,

however an audit by Abraham and Gaffney also determined that the city was doing things right with regard to making sure that expenditures, revenues and bills matched.
This left the question of why rates were so high, and what could be done about them.  At the Monday, Feb. 10 City Council meeting, City Manager April Lynch explained that there are two main philosophies of water system management: depreciation or bonding.  With a depreciation-based model, the city saves for the future.  With a bonding-based model, other cities wait until work is needed and then borrows the money with a bond.
Ferndale has grown a $8.5 million water fund balance, with the expectation that the money will be used on future infrastructure projects.  Lynch presented Ferndale’s water system data alongside two comparable

cities, which were left unnamed.  City #1 has only $4 million in reserve, and City #2 has only $2 million.
“The difference is this: we are planning on paying cash for projects in the future,” Lynch said.  “Right now while it seems we are higher…We are prepared to manage our system.  Other cities will go out for bonds and their rates will go up… By doing this we continue to be ahead of the curve.”
The high balance also means that when the City’s current infrastructure bonds expire in 2016, any bond renewals are expected not to include water and sewer-related projects according to both City Manager Lynch and Mayor Dave Coulter.
Lynch estimates that over the next 15 years, there should be about $7 million worth of projects that will need to be completed to maintain the system, not counting any unexpected expenses.  With a strong fund balance,

these costs should be manageable without taking on the fees and long-term debt associated with a bond.
The fund balance also provides some security as discussions of a regional water authority take place. Ferndale and neighboring communities, purchase water through the Detroit Water Department.  “If the authority happens it could significantly affect the suburbs and not necessarily in a good way,” Lynch said.  No one can predict how the price of water will change, but having a fund balance can be a way to guard against spikes in cost, she explained.
However, Ferndale’s fund balance has been little comfort to residents who struggle to pay their bills.  Dissatisfaction with water service has been compounded by memories of the less-than-flawless implementation of new water meters and remote meter reading. The installations were finally complete

and functioning in 2013 after months of only 80% efficiency.  The system is working properly now, but the frustration lingers for bill-payers who received bigger-than-expected bills with the more accurate readings.
In March 2013 City Council took initial steps to make it easier for people to pay their bills.  They instituted online payments and voted not to charge a fee for them.  They also eliminated a $50 late charge and retained a simple 10% fee.  They established payment plans, including a six-month option and temporary hardship considerations. And they began the process of creating customized water bills that better break down charges, which are expected to be implemented later this year.
Councilperson Dan Martin, who initiated the investigation into water rates, was glad to see the months of research come together.  “The City has been very fiscally responsible in making sure that the fund is capitalized properly

to protect residents against future rate shocks caused by infrastructure needs. The time is now right for a rate reduction in recognition of that, both in planning for the future and providing relief to our residents,” he said.
Monday’s vote will take the rates from $110 (plus a $33 fee) to $99 (plus a $29.70 fee).  The fee, Lynch said, covers administration costs of the system and obligatory interest on bonds.  Some other cities have a minimum usage fee to make sure that this expense is met.  The rates represent a “combined rate” of both water and sewer charges. The fees are all per 1000 cubic foot.
In the example presented Monday, City #1 has a combined rate of $93, and City #2 has a combined rate of $84.  In the March 25 report looking at multiple cities, the range is between $32.90 in Berkley and $121.79 in Pleasant Ridge.  The median of all reported cities is $55.15.

The 10% cut in rates for Ferndale allows the city to continue setting aside money for maintenance, while also providing relief for bill-payers.  “What I like is even with the decrease we will continue to invest in our future,” said Councilperson Greg Pawlica.
The rate cut was unanimously approved, and it will take effect July 1. 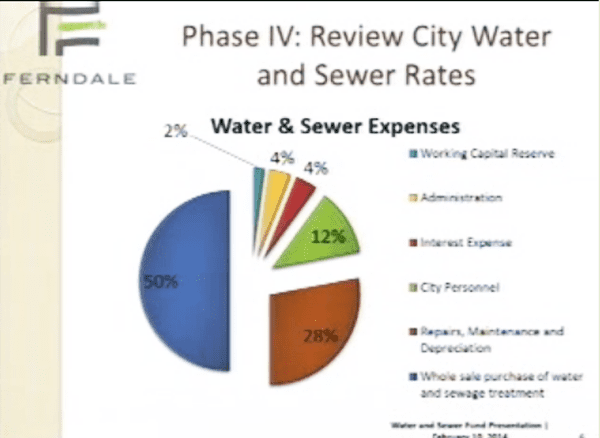