(Crystal A. Proxmire, Feb. 9, 2014)
Elected officials in Southfield, Ferndale and Royal Oak have a message for the legislature in Lansing: restore municipal funding.
At the most recent Council and Commission meetings, each City passed a nearly identical resolution calling on state leaders to fix Michigan’s broken municipal finance system.
“It’s a response to Governor Snyder touting around a state budget surplus but Michigan residents shouldn’t be fooled. That surplus resulted from slashing $6 billion in the last decade to local communities – money

Jeremy Mahrle introduced the resolution in Royal Oak.  “I was proud to introduce this resolution encouraging the Governor and State Legislature to fix the way we fund our cities in Michigan. The funds taken away put essential services at risk, making us less safe and forcing tax increases in the form of local millages onto our residents. I was disappointed that Rick Snyder’s budget proposal did not seriously address these issues,” he said.
According to the 2013 budget for Ferndale, state shared revenues were around $4,250,000 in 2001.  In 2013 that was down to just over $2,000,000.
The resolution for Ferndale states “The City of Ferndale has experienced a significant decline in property tax values, which has caused unprecedented fiscal constraints; and
at the same time the City of Ferndale has confronted consistent reductions in State Shared Revenue, as part of the cuts to State Shared Revenue state-wide; and due to this unrelenting fiscal pressure, the City of Ferndale has been compelled to reduce the level of municipal services historically provided to the residents, businesses and schools in our community; and
“These municipal services protect the health, safety and welfare of our citizens, and are an essential component of

building a strong local economy and maintaining a vibrant community; and
On January 10, 2014 a state budget surplus was announced which in part is a result of the governor and Legislature taking approximately $6 billion over the past decade that by law was supposed to go to local communities to fund local police and fire services, road maintenance, snow plowing, drinking water systems, and more.
“THEREFORE BE IT RESOLVED, that the City of Ferndale urges the Legislature to partner with local communities to enable them to provide essential services, such as police and fire, invest in critical infrastructure improvements, and create vibrant places that attract and retain talent; and
“BE IT FURTHER RESOLVED, that the City of Ferndale urges the Legislature to take ownership of the fact that by taking local revenues to plug holes in the state budget, they have helped create the fiscal crises

facing many local communities across Michigan, even as spending on the state budget has increased 26 percent in the past decade or so. This is a critical time to reinvest in communities…
“BE IT FINALLY RESOLVED, that the City of Ferndale strongly urges the Legislature to fix Michigan’s broken municipal finance system and restore funds to local governments.”
Councilperson Dan Martin introduced the resolution in Ferndale.  “It is important for local communities to stand together and say enough to a misleading message about the surplus created at the expense of important core municipal services.  We need partners in Lansing that will help recognize the problems in the municipal finance system and work with us to address them equitably,” Martin said.
The resolutions in Southfield and Royal Oak had nearly identical language.  All three were passed on Jan. 27 and sent to various recipients including Governor Rick Snyder and elected officials in Lansing.
To join in the conversation, visit The Oakland County 115 News Hub’s Facebook Page at https://www.facebook.com/oc115. 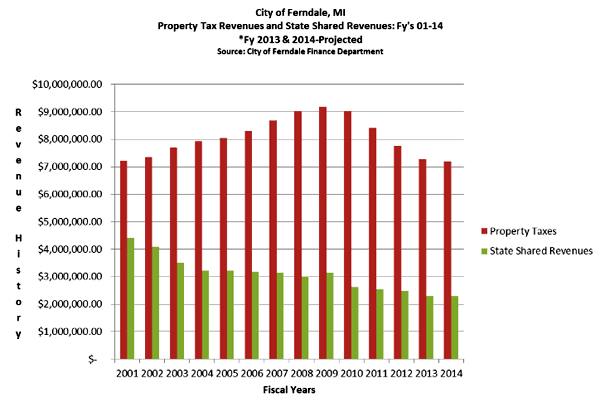