67-year-old Douglas Morehead was described as a friendly man who “scooted along” as he walked.  He drove himself to his job at Toys R Us and would give money to those who wanted to test his generosity. And, testified a manager from the Devon Square Apartments, Morehead knew never to give his apartment or vehicle keys to anyone else.

Morehead was murdered in his own apartment on Jan. 12, 2014.  He had been stabbed with a kitchen knife.

The suspect, William Thomas Goad, 37, was bound over to stand trial after a preliminary exam on Tuesday.  Police

testified that after Goad was arrested in Hazel Park on unrelated charges, he confessed both to stabbing and strangling the older man.  Goad was recorded on security cameras coming and going from Morehead’s apartment, first with the victim and then alone.  After that Goad was recorded taking items from the apartment. Another witness testified having gotten the victim’s car by borrowing it from Goad.

A manager at Devon Square apartments testified that on Jan. 10 she saw Morehead alive and in good health.  Her office butted up to the man’s apartment, so she saw him frequently and was familiar with his habits.  Morehead took part in a monthly residents’ meeting that was held in the community room on Jan. 10, and that was the last time she saw him alive.

On Jan. 14 she received a call from Morehead’s sister stating that she’d not heard from him in a couple of days.  The manager noticed that Morehead’s blue Chevy Cobalt was not parked in its normal spot, so she

had a maintenance person go knock on his door.  There was music on in the apartment, but no one answered the door, she said.  A sign on the door said “I’m ok.”  The manager then checked the surveillance tapes from the previous few days.  On Sunday Jan. 12 the video showed Morehead and Goad going into the apartment for about 45 minutes then leaving together.  Then Morehead returned alone.  At about 5pm Morehead left and at 5:40pm he returned again with Goad.  At about 6:43pm, Goad is seen leaving the apartment alone and using Morehead’s keys to lock the door.

“I grabbed the telephone and I called the Ferndale Police because I immediately knew something was not right.  Doug would never give away his keys,” the manager testified.  She explained that the police came and did a safety

check using the manager’s key.  An officer poked his head into the room and indicated Morehead was there, and that she “immediately turned around and went back to the office,” adding that she did not want to see what had happened.

The officer who came to do the safety check testified to finding Morehead on the floor of the apartment obviously deceased.  He and another officer secured the scene until detectives could arrive.

Another witness testified as to Goad’s actions over those few days in January.  The 42-year-old Detroit man knew Goad as “Wild Bill,”  stating that he had been introduced by a mutual friend eight months prior.  He said that on Sunday, Jan. 12 he’d been watching football with his uncle and a friend when Goad came over. He said that Goad claimed he was borrowing the car from a friend for a few days while the friend was out of town, but since he had no use for a car he wanted to rent the car to the witness to use for that time period.  “I gave him money in exchange for using the car.  He didn’t really need the car, he’d rather have the money,” the witness said.

The witness was stopped by police near 7 Mile and I-75 while driving the vehicle.  Police kept the vehicle and had the witness make a statement.  In that statement

he wrote that Goad had not been acting suspicious.

The Hazel Park officer who took Goad’s confession also testified.  He’d met Goad during previous criminal matters.  After Goad admitted to three non-violent crimes in Hazel Park, the officer asked him “if there was anything else he wanted to talk about.”  Goad was then re-read his Miranda rights, and confessed on video and audio to the killing in Ferndale.

According to the testimony, Goad admitted to taking the television, the vehicle, food, and approximately $24.

Based on the evidence and testimony, Goad was held over for trial on charges of homicide, unlawful

driving of a vehicle, and larceny from building.  He is expected to be arraigned for trial in Oakland County Circuit Court on Feb. 13. 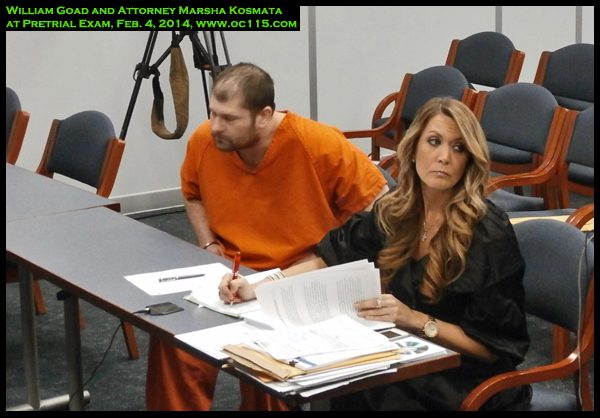