Promises Kept: Because I Said I Would (video)

Are promises more meaningful than resolutions? That’s the idea behind the Because I Said I Would project that came

to several cities on New Year’s Eve, including Dino’s Lounge in Ferndale.
Over 200 people made promises they posted on the Because I Said I Would wall.
“I am a big believer in promises, keeping my word on something defines my most basic core values.  I am very selective about making promises at ANY time, because I always want to make sure it is something I can keep,” said co-organizer Mindy Cupples.
“The two promises I posted were, ‘I will run in 4 -5k’s in 2014’, it is something I have been wanting to do. The thing is I hate running, but I want to be able to run enough and be physically equipped so I am not afraid to go for a run for exercise.  This goal will keep me focused on that for the whole year.  My other

promise was to ‘take more chances.’  I am always scared about what will happen if I make a certain decision. How is this going to end? If I do this what will happen?  Sometimes, you just have to go with it.  That is what I am going to try and do.”
The event was filmed and people from Dino’s were featured along with people from Evergreen, Co; Houston, Tx., San Rafael, California, San Jose, California, College Station, TX, Cleveland, OH.  Local band The Sun Messengers kept promise-keepers and partiers moving as they celebrated the count-down to the new year.  Vounteer Matt Laduke made the Ferndale part of the final video possible, volunteering his New Year’s Eve to work the camera.
“Some of the promises that people made that stood out to me, were the ones about family.  I remember one person putting down a promise to: have family vacations,” Cupples said.  “Another said he will spend more time with his kids instead of his computer. Another was to tell their sister how much she meant to them.  Really great things and touching.  One that I saw was: I will not let my past define my future.”

Clinton Township resident Lance Barba was featured in the final video for the event, vowing to go to the gym and bring his weight down.  Since New Year’s Eve he’s been logging his gym visits on his Facebook page, and getting support from family and friends.  “I have been to Planet Fitness five times in the last week, added a major amount of fruits and vegetables to my diet (as well as a few supplements from GNC) and I feel amazing! My sleep habits have improved, I feel markedly less winded, and my clothes don’t fit nearly as snug. I should have done this years ago.”
Tara Yax of Port Huron made the national video,  promising to make five people smile every day.
Julia Music, the other co-organizer, made several promises that she is in the process of keeping.  She and her friend Alyssa Stybel promised to design a greeting card to raise money for the Ruth Ellis Center.  That one is still a work in progress.  She came out to her Grandmother as bisexual two days after she made the promise.  “I made an additional promise to donate blood before the 21st and did I have been keeping the

promise to do an hour of yoga a week,” Music said.  She’s also planning on running a half marathon for a local charity.
Cupples is happy to see that several of her friends are following through with their promises.  “I think there is something about a Promise that resonates with people, most have been taught since a very young age, if you make a promise you should keep it, don’t break your promises. It’s a great message.
“On the other hand, I think that people’s experience with a ‘resolution,’ is that is it ok if you don’t keep it, because nobody does.  It’s strange how society can dictate how people look at things differently.  Resolution and Promise, they mean the same thing, but people allow themselves to treat them differently.”
Because I Said I Would is a social media movement started by a man named Alex Sheen who came up with the idea to honor his father who passed away in 2012 from cancer.  To find out more about Because I Said I Would, visit http://becauseisaidiwould.com/about/. 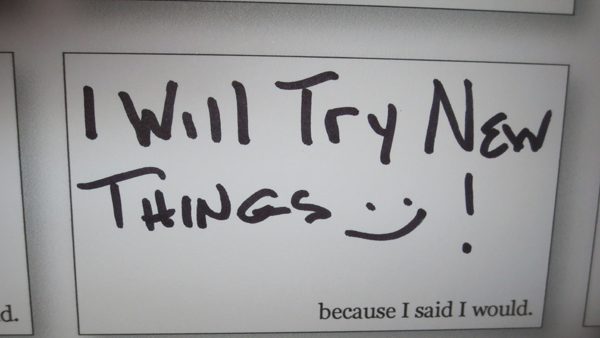 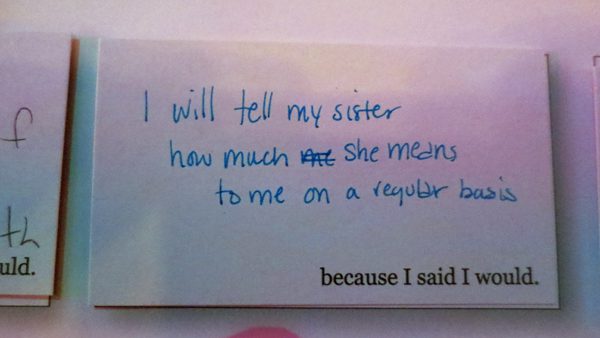 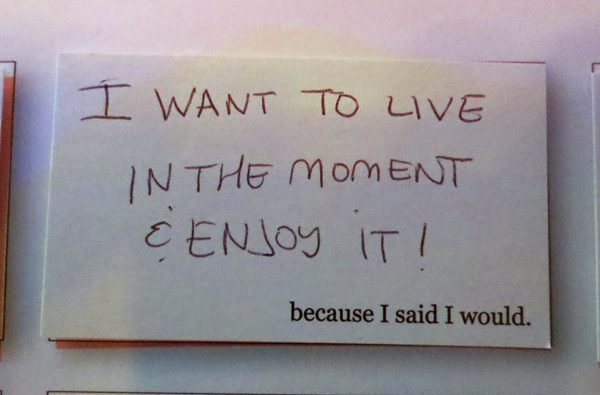