A Quick Trip Through the Progressive Motorcycle Show

A Quick Trip Through the Progressive International Motorcycle Show

(Ron Arnold, Jan. 15, 2014)
Despite the severe weather, the Novi version of the venerable Progressive International Motorcycle show was a popular event for the snow-caked, riding-starved motorcycle and scooter fans of SE Michigan.
Friday afternoon was filled with the usual opening festivities and a decent-sized crowd. The major manufacturer booths were well attended, especially Ducati. The Honda, Kawasaki and Yamaha booths were very busy as well, especially as the happy hour beverages from the carts and bars built into the event raised spirits a bit. The first of the XDL Street Jam Stunt Shows started and keep the crowds happy.
Saturday was when the crowds really showed up. Happy vendors and busy booths marked a packed day at 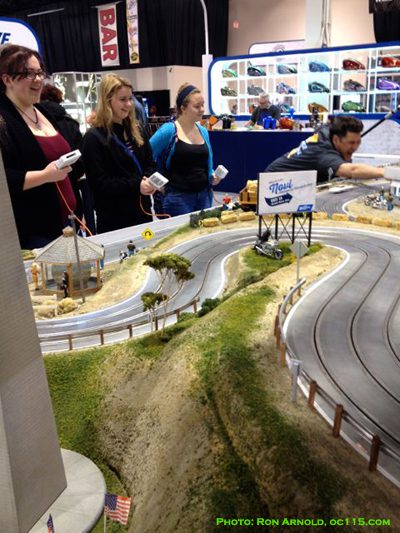 the show. Full booths, jumping food sales and more than a few beverages were consumed. In the used bike reseller booths, they had a busy days. Darren Finnen of Monroe Powersports said that they “moved eight bikes on Saturday” and that despite the economy, “our business has been fine for the last few years. We always have 350 bikes so we usually can get someone on a bike that day.” Other vendors had similar stories and again (like last year) were surprised at the solid turnout all day Saturday. We are after all, one of the smaller shows on the tour, so the attendance is a big thing with the show promoters. I wonder what it would be if this was a show that happened in our riding season?

Sunday’s impending weather had a lot of people worried about attendance, but surprisingly, the show had a good flow of people steadily building throughout the day. I arrived early to a snowy Suburban Collection Showplace (now featuring its very own on-site hotel), and immediately headed to the Honda booth to check out the new, small-scale motorcycle, the “Grom.”
The Grom is a diminutive, but full-featured, motorcycle with an air-cooled 125cc, 4-stroke engine, with a 4-speed manual transmission and fuel injection. I’ve read about the Grom in several publications and have wondered about the extremely positive reviews. The Grom is close to a 7/10ths scale motorcycle, but seems to have everything that a beginning or commuter rider would want. The riding position is good, with a 30 inch seat height that feels a

lot lower due to the narrow seat. The handlebars are near perfect to support an upright position, and I immediately began thinking about how I could get a ride on a Grom once the decent weather returns. Discs front and rear supply the braking and the small looking 12” wheels hold some pretty nice looking Vee rubber.
The new Honda Forza was also there, and despite it being “all new” it’s not a huge departure from the old Reflex. The Forza offers a bit more horsepower and efficiency from its slightly larger (279cc) engine and has also benefited from a visit to the Honda PCX 150 school of styling. It’s smoother and seems to be a better integrated overall design than past middle-sized scooters from Honda. The Grom seems like a steal at $2999 while the Forza seems to be decently priced at $5100 (with ABS available optionally.) Although I’m a scooter guy, and a former Reflex rider, I kept going back to the small-bike Grom. I liked it so much that the Honda Grom is my motorcycle of the show. It’s incredibly cool-looking in person and I think that we are going to see a lot of Groms around SE Michigan.
After a quick trip through the Yamaha booth to check out their offerings (lightly tweaked versions of the Vino and Zuma,) I walked through the Indian booth to check out their impressive (and expensive) old-school with new(ish) technology rides. The term incredible doesn’t describe them adequately, as they seem like massive and beautiful machines.

The BMW scoots were next and they still remain an impressive presence in the maxi-scooter scene. I’m not sure what’s changed on them for 2014, but the C600 Sport and C650 GT looked great. The prices are carryovers from last year, and suddenly seem to be much more reasonable now that Vespa has introduced the similarly-priced (but museum quality) 946.
After a pause for some fairly decent event-style grub, I checked out the bikes entered in the Ultimate Builder Custom Bike Show by J&P Cycles and I wondered where some of these guys get their crazy ideas. Amazing craftsmanship meets unfettered imagination.
I finally reached the Yamaha display where I was surprised to find the newest (and smallest) Burgman scooter on featured display. It was the Bergman 200, and the surprise was real as I had thought that this

was a Europe-only scooter. I was wrong and I’ve never been happier, as the Burgman looks to be an excellent addition to Yamaha’s Burgman ladder (with 400 and 650 versions to aspire to.) The 200 looks to be a near ideally-sized scooter, both in a physical sense much smaller than the Silverwing-class Burgman 650,) with the size of the engine (200cc of 4-stroke, liquid-cooled, SOHC, fuel-injected single cylinder engine) and the inclusion of ABS as a standard feature. Although I couldn’t sit on the scoot (it was up on a display), the seat looked of a nice quality vinyl with contrasting stitching. It opens to reveal a nice-sized storage compartment and there is a lockable cubbie and glove-box (with 12-volt outlet) and a push-to-open storage bin. The instruments looked of a decent quality and the whole package seemed very well put together. With a fair price of $4999 (including ABS), noticeable build quality and a good, medium size, the Suzuki Bergman 200 is my scooter of the show.
I wrapped up my show with a visit to the Motorcycle Superstore Marketplace where gear and helmets of all descriptions were available to try on. A great idea for those

who need to get a feel for the gear before going to your local dealer or online retailer to get your gear.
As the heavy snow started to fall, so ended a quick visit to the 2014 version of the Progressive International Motorcycle Show in Novi. It’s a great start to a great year of riding two wheels in and around SE Michigan. Now, let’s see if we can get through this winter and live to see the riding season!
Ron Arnold is transplant from Central Florida and a 14-year resident of Royal Oak. He works as a performance consultant in the training industry, and is a contributor to Examiner.com and eLearning Industry. He is an active member of the Rovers Scooter Club and can frequently be seen riding a variety of scooters in and around SE Michigan. Ron will be contributing scooter lifestyle and alternative transportation stories for the oc115.