Todd Lloyd, 51, and his partner, Christopher Neumann, 38, of Birmingham, were killed Monday morning when their single-engine Mooney M20 plane crashed shortly after take-off. The men left from Boyne City Airport headed towards Troy in dismal weather conditions and crashed in the woods about 45 miles northeast of Traverse City.

The plane was registered to Chaircovers and Linens, a Madison Heights-based business owned by Lloyd. Lloyd also is the owner of Livonia-based Top That Event.

The National Association for Catering & Events sent out a release to members informing them of the loss. Lloyd was president of NACE for 2009-2010.

“The Greater Detroit Chapter of NACE is forever indebted to Todd. …Despite his incredible successes, Todd always remained humble: a great friend and leader to all who knew him. He took many NACE members under his wing, molding, guiding and shaping them to become the next leaders of the organization. Education was his passion; Todd strived to involve students in the NACE chapter, firmly believing in the importance of the next generation of NACE in the events industry.

“Todd’s infectious laugh, sense of humor, and charm made him “the life of the party” and the person in the room everyone wanted to know. He never took life too seriously and could always find a reason to laugh, even at his own expense. Whether dressed as “The Mad Hatter” or as “The Linen Hero” (complete with spandex jumpsuit), Todd kept everyone at NACE thoroughly entertained,” the release said.

Longtime friend Jim Rasor was among dozens who expressed their grief on Facebook, stating “Beyond saddened to hear that my friends Todd Lloyd and Christopher Neumann were lost today in a tragic accident. They were so vibrant and full of life and adventure. Todd and Chris were perfect hosts, great friends, and successful businessmen with a deep commitment to each other, their families, friends and community. My thoughts are with them and their loved ones.”

A chilling picture found on Lloyd’s Facebook page shows this was not his first plane accident. A photo posted Aug. 25, 2009 shows a small plane with its nose dug into the ground and the caption “My first, and last, Plane Crash! Well, not really a crash but exciting non the less. After landing the nose wheel collapse and the plane nosed over. It happened during the roll out so we weren’t going very fast and it was uneventful. One of my passengers didn’t even realize anything was wrong. Now we all have an adventurous story to tell. I’m sure Robert is telling everyone we almost died. [sic]” 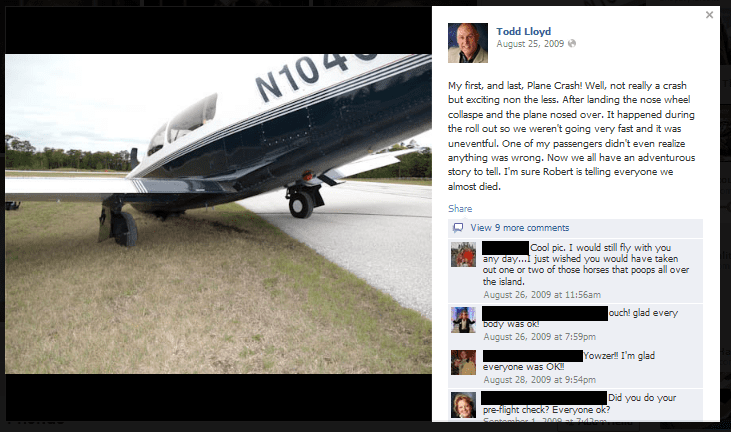