In 1959, James Beilling of Clawson opened ‘Faym-Us Chicken’ in Clawson. This small take-out chicken place with dining counter and the very large chicken on top of the building quickly earned a reputation for amazing chicken and take-out dinners. Its large rooftop bird also made it a very visible and iconic place in the city.

James owned the business and served great food to his neighbors until about 2000, when the business changed hands. The food was still great, but like many places though, it eventually fell on hard times, and

had to shut its doors and usually that is the end.

Alvin Pedroche had other ideas. Not content to let this iconic place fade away, he wanted to see it restored to its former glory and he put his money behind it.

Now after a long remodeling that saw the inside get a complete facelift and switch to all take-out, ‘Faym-Us Chicken & Seafood’ on December 10.

The dining counter is gone, but entire place has had every tile replaced, and the entire place scrubbed and steamed clean. I was there and got to meet original owner James and current owner Alvin. James was thrilled to see the business he built and ran with success, be revitalized by a new and energetic owned with a passion for great chicken. In fact, during the remodeling, the wall paneling was removed and they found a large collection of original receipts from the fifties. It was a great trip for the Alvin and the crew to see to remind them of what they were bringing back.

Alvin was only too eager to show off the chicken. Using James’ original recipe and developing new ones to bring the menu forward, he offered James and I a taste of the waffles that are part of his new chicken and waffles. Two pieces of chicken on a homemade Belgian waffle, made to order. I took a bite and it was the perfect waffle for the chicken. The french fries are excellent. And the chicken pieces are huge.

Alvin was very proud that the boxes at times are almost too small for the pieces.

Then Alvin hit me with the bombshell. “Nothing of our chicken is frozen” he said. “We cook everything

from fresh.” In this day where any restaurant can call and have a bag of frozen, breaded chicken dropped off that they just toss in a fryer, this was huge to me.

I would love to comment on the ribs or seafood, but I have not had a chance to try them yet, though the people I saw who tried them seemed very happy. I will definitely be going back, and often. Not just because they chicken is amazing (though that is a major reason), but also because it’s good to see a local business that can thrive again.

Russ Herschler is a Chicken-a-holic and does not pretend to be unbiased. 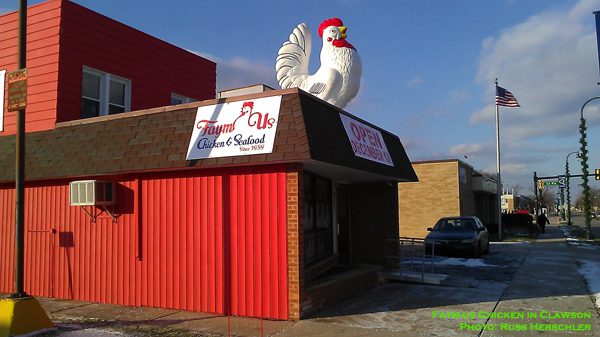 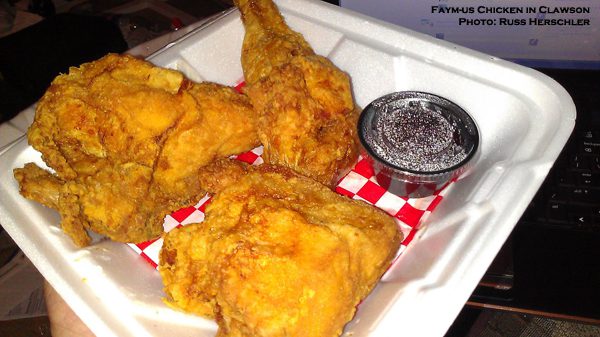 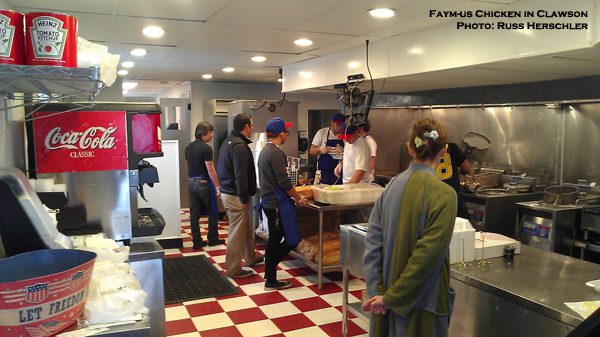