Even though it’s been five years, Beth Ziemba cannot say the words “murderer” or “killer” without them getting caught on the lump in her throat.  The thought that the man who shot her son-in-law to death on Dec. 28, 2008 could be released from prison on parole is almost too much to bear.

Oak Park Officer Mason Samborski conducted a routine traffic stop on 16-year-old Jonathan Belton.  The teen was driving his mother’s car and did not have a license.  Rather than arresting the youth, Samborski offered to drive the teen home and release him to his mother.  Belton gave a false address, and the officer

drove him to the Rue Versailles Apartments near 10 Mile and Greenfield.  A scuffle ensued and Samborski was shot in the head with his own gun.  A witness testified seeing Belton standing over him, holding the weapon.

Belton was charged as an adult and received life in prison without parole.  A Nov. 26, 2013 order by U.S. District Court Judge John Corbett O’Meara in the case of Hill v. Snyder “requires the State to give notice within the next nine days to approximately 360 inmates that their eligibility for parole will be considered in a meaningful and realistic manner.  And within that same time period, prisoners sentenced to life imprisonment without parole for crimes committed as juveniles must be provided any educational or training program which is otherwise available to the general prison population.”

The order is on hold after a three judge panel of the U.S. Court of Appeals for the 6th Circuit issued a stay at the request of Michigan Attorney General Bill Schuette.  In 2012 the US Supreme Court ruled that life in prison for juveniles was unconstitutional (Miller v. Alabama).  That same year the Michigan Supreme Court ruled that this could not be applied retroactively to cases in Michigan. According to Schuette, O’Meara’s ruling contradicts what the Michigan Supreme Court already decided, and he will be arguing this on appeal.  According to Schuette’s office there are nearly 360 people in prison for life who committed crimes as juveniles.

“It has been a rough year,” Ziemba said.  “It’s the fifth year and it just seems like we had the appeal that we had to appear in court

again with this person that murdered him, and it was very difficult.  And then learning about the recent sentencing where Mason’s, the person [who shot him], can get, may get, parole.  That’s a hard, hard thing to swallow quite frankly.”

Public Safety Director Steve Cooper spoke about the loss the community faced when Samborski was killed.  “One of the things that resonated or stuck out in my mind from the words I prepared, I talked about Mason being a fine officer and went on to say that he was a fine husband, and a brother, and a father, son, friend etc.  And when you say those things, you know obviously I learned those things.  I knew him as an officer, but all of you knew him as the others, as brother, and son, and father.  And when you prepare words and you actually come out and say these things about people, it’s not

very often that you can get out there and say that he’s a fine officer, brother, son, father in every respect and actually with 100% sincerity, with genuineness, actually mean that.  Mason truly was.”

Samborski is remembered daily by officers in Oak Park, Cooper said.  He and another officer who lost his life in the line of duty 40 years ago, Henry Wolf, have photos through the public safety building.  Oak Park recently built a new public safety building, and named it in Wolf and Samborski’s honor.  Wolf was shot nearly 40 years ago when he pulled over a vehicle whose occupants were suspected of having a gun.

Six-year-old Madeline Samborski was just a year old when her father was killed.  She and her mother Sarah lit the ceremonial candle at the beginning of a memorial held Dec. 27 at Oak Park City Hall.  The candle was originally the unity

candle for Mason and Sarah’s wedding.  “We lit this each year on our anniversary,” Sarah said.  “We only had three anniversaries together.”  The front of the candle now has the image of the fallen officer’s police badge, and the back still has the couple’s wedding announcement.

Family and friends gather each year so that Madeline can hear stories of her father and see what her father did for a living.  Officer Tony Carignan told the story of how on a cold Christmas night Samborski pulled into the pound where code enforcement officer Kevin Jones was there tending to the animals.  Samborski had rescued a full sized German shepherd from the middle of 9 Mile and Greenfield.  While inside talking to Jones, the dog squeezed through the tiny window to get from the back seat of the patrol car to the front.  The men nicknamed the dog Ammo.  Jones wanted the dog, but

his wife was not fond of the idea.  But after several days of sending the dog out to be adopted, Jones went to the shelter and called Ammo’s name.  The dog recognized his voice and Jones spent the money to adopt him.  Now the dog is older, and spends a good deal of time lying around, and when Jones looks at him he thinks of the officer who rescued him.

Samborski’s niece also has moments of remembering.  The bashful girl asked her mother to tell the story of the pigtails.  “It was after Uncle Mason had already passed away she had pigtails in her hair for the first time.  And she ran to the mirror to look at them and she had a big grin on her face, and she said ‘I can’t wait to tell Uncle Mason, he would have loved them!’  And she had forgot that he had already passed away,” she said.

Family members are part of a group fighting the release of teen offenders from prison. The National Organization of Victims of Juvenile Lifers has stories from families like the Samborski’s.  For more information and to read more about Mason Samborski, visit http://www.teenkillers.org/index.php/memorials/michigan-victims/officer-mason-samborski/. 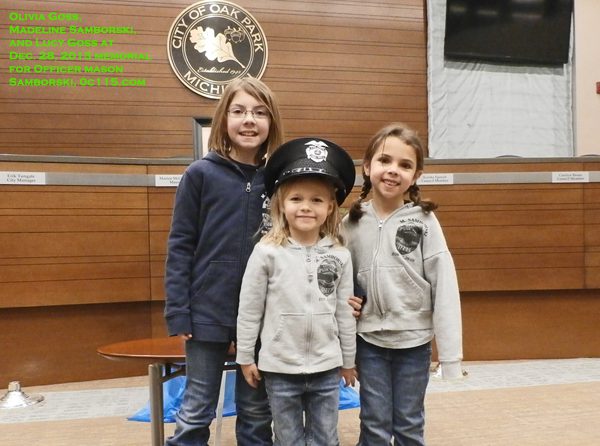 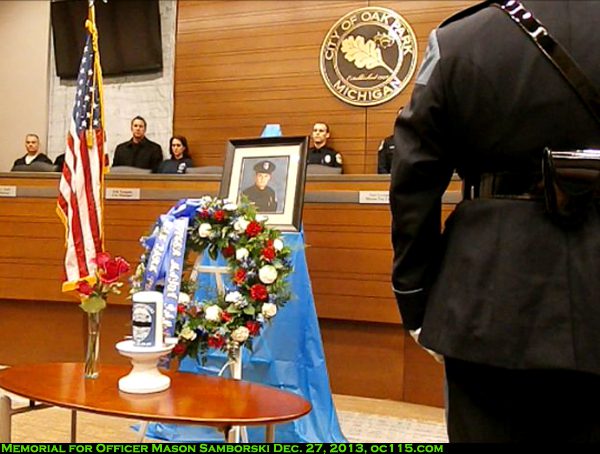