Although it doesn’t appeal to all, many anglers actually prefer fishing through the ice to open-water fishing. For one thing, anglers can get just about anywhere on the lake during ice fishing season, something they can’t do without a boat during the open water season.  Virtually every fish that’s available to anglers in the summer can be caught through the ice – some are even caught more frequently in the winter.

Once you’ve spent a little time on the ice, you’ll soon see a different picture. Ice fishing is more than just a way to fill the long days of winter.  It’s a chance to breathe the cold, clean winter air, to spend quiet time outdoors with family and friends, and to relax and collect one’s thoughts away from the hustle and bustle of a busy

Just walking on the ice can be a unique experience, especially when no snow obscures the view of the water below. However, as with any outdoor activity, safety should be your top concern. When it comes to ice safety, you should steer clear of dark spots or places where the snow looks discolored.

Some other good rules to follow include: 1. Never fish alone, 2. Tell someone where you are going and when you expect to return, 3. Always test the ice with a spud (described later), 4. Take the appropriate emergency items, such as a lifejacket and ice picks, and 5. Take a cell phone with you in case you need to call for help. Dress in your warmest winter clothes; fill a thermos with hot coffee, chocolate or tea; and bring an empty bucket or old lawn chair to sit on.

To get started ice fishing, you’ll need the basics: something to make a hole in the ice, something to clear the hole and keep it open and ice free, and something to fish with, or equipment.
The two basic tools used to make holes in the ice are spuds and augers. A spud features a long-shank with a

chisel-like end that’s used to chip a hole in the ice. A spud is a tool you use when the ice isn’t too thick. An auger is a corkscrew-like device with a cutting blade that operates like a hand drill to make a hole in the ice. For extremely thick ice, power augers that run on batteries or small gasoline engines are available and make creating holes much easier.

Once the hole is created it needs to be cleared of ice chips or slush. A skimmer (or a slush scoop) is a small cup with holes in it (to let the water run out) on a long handle. It is inexpensive and perfectly suited for the job. A skimmer is used to clear the hole right after it’s made, as well as throughout the day if it’s particularly cold and if additional ice forms.

Please note the size of the hole is important. The hole must be big enough that you can get a fish out, but not too large of a hole that it may endanger someone’s life. Anglers are recommended to keep their holes to a maximum of eight to 10 inches in diameter which would accommodate the size of most fish species. When abandoning fishing holes, anglers should mark them with a tree branch, sticks or chunks of ice to alert others of

Ice fishing equipment can be divided into three basic categories: hook-and-line, tip-ups and spears.
Most hook-and-line anglers use short, limber rods with reels or simple spring-tension spools to hold the line. Sometimes they may use something as simple as a couple of pegs on the rod handle used to wrap the line around. Limber rods allow the use of light line, which usually results in better fishing and absorbs more of the shock when fighting fish.
Hook-and-line anglers use live bait, artificial lures or sometimes both to catch many different species of fish. Anglers often use small lures, such as teardrops or flies, with live bait – such as wax worms (bee moth larva), spikes (fly larvae), wigglers (mayfly larvae) or minnows – attached to the hook for better action. The bait can be fished without movement or jigging can be used to attract the fish. Jigging is most successful if a lure of

any kind is used.

Hook-and-line anglers have the choice of using a bobber on the line, just as they would while fishing in the summer. Some may also fish with a tight line and use a spring bobber, which is a small strip of metal or wire that extends off the rod tip like an additional eye on the rod. Any motion alerts anglers to the bite, a bonus for small fish or light-biters. Generally, anglers begin by fishing near the bottom and work their way up in the water column until they locate the fish, then continue to fish at that same depth. Anglers can use bobbers to set their baits at a preferred depth or fish a tight line, either fishing without movement or jigging.

For bigger fish, anglers use heavier gear with larger lures or bigger hooks which allows them to use larger baits – minnows, smelt, salmon eggs or spawn bags. Anglers generally start at the bottom and gradually move up in the water column when jigging, while those fishing with live bait, spawn bags or salmon eggs generally fish right 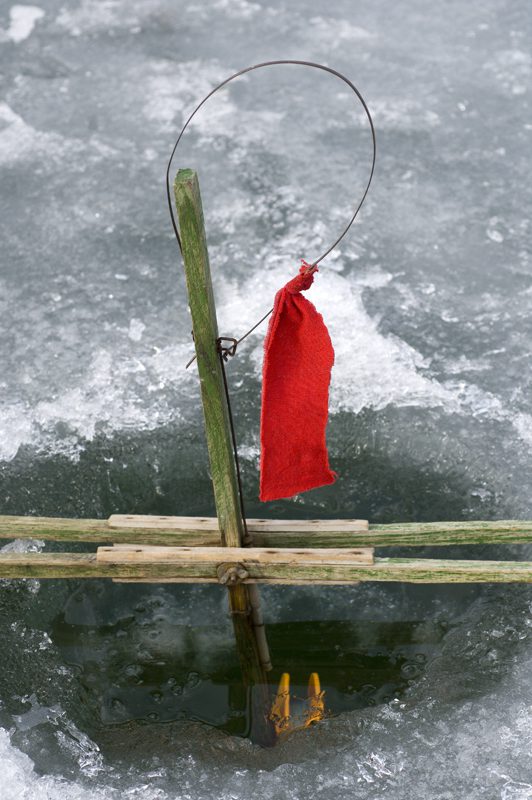 Some anglers prefer to fish with tip-ups, which are devices set on the ice above the hole that dangle the bait (most often minnows) beneath them. Tip-ups, which feature small reels submerged in the water, get their name from a flag that’s bent over and attached to the reel. When a fish takes the bait, the reel turns and releases not only line, but the flag as well. The flags’ “tip up” action alerts the angler to the fish taking out line. Tip-ups are usually spooled with heavy, braided line. Often an angler who is fishing with a rod will also set a tip-up in a different hole, giving them two ways to catch a fish and giving them an opportunity to fish for different species, or more than one fish, or at two different but close by locations.

Spearing is another form of ice fishing that is a more specialized but traditional sport. Anglers who spear cut large holes in the ice, usually with an ice saw or chain saw. They fish from tents or small shelters commonly called shanties that can be portable or more permanent (or at least as permanent as the ice is). The shanty blocks the light, allowing anglers to see down more clearly in the water in order to spear the fish. This has given rise to the term dark-house spearing. Spearing anglers generally dangle decoys or large live baits (such as suckers) in the water to

attract their target fish. They utilize spears that typically have a substantial weight to them and have seven to nine tines on the end of a seven-foot handle.

The most common species hook-and-line ice fishermen are looking for are panfish: bluegill, sunfish, perch and crappie. Tip-ups are generally used for larger game fish, such as northern pike, walleye and various trout species. In Michigan, spear fishermen are allowed to target northern pike, muskellunge, lake sturgeon and many other species. There are many restrictions associated with spear fishing and anglers should read the annual Michigan Fishing Guide for more information.

A basic tip for all three ice fishing methods is that the most success is seen around dawn until mid-morning and again from late afternoon until sundown. This is especially true for panfish and walleye. Some species can be more aggressive at other times during the day, such as northern pike. It’s also important to understand that fish are more sluggish during the winter and move around less, especially during the middle of winter when ice thickness and snow cover is the heaviest. The more holes anglers cut and try, the better their chances are for locating aggressive fish.

One common piece of equipment nearly all types of anglers who ice fish utilize are electronic fish finders. These

help anglers locate both aggressive and non-aggressive fish and make it easier to determine if your holes will be active and how present fish are reacting to your fishing methods.
It’s important to be prepared to face the elements when you go ice fishing by including these items: shelter and apparel.

Ice fishing can be a fairly cold activity, especially on those windy days when it doesn’t seem fit to be outdoors. On such days, a shanty is almost a requirement. Many portable shanties are available at your local sporting goods store, although some anglers, especially in northern Michigan where the ice fishing season can last for many months build elaborate but removable shanties on the ice. These may have insulated walls and many of the comforts of home. Propane heaters can keep them warm and help keep the fishing holes from freezing. But even a simple windbreak, made of plywood or particle board, can help. A sheet of plywood, cut in half and hinged, makes a simple windbreak. If skis or runners are added to one side, then it can easily be pulled across the ice.

It’s important to note that all shanties must be removed from the ice by a certain date, appropriate to the zone

in which you are fishing. When removing a shanty, anglers must also remove any and all garbage affiliated with the structure, including plywood and propane tanks.

On less harsh days, many anglers can be seen on the ice on portable folding stools or overturned five-gallon plastic buckets. Buckets often double as gear carriers. Anglers can fit their rods, lures and baits into a bucket and easily carry them out on the ice with them. In many cases, anglers build gear boxes, often on sleds or skis, which they can pull behind them. The creativity of Michigan anglers can regularly be seen on the ice as many have built sophisticated devices to transport their gear and to insure their comfort.

Anglers who go out on the ice with or without shelters must dress for the weather. Anglers should dress in layers so they can add or remove them as the temperature changes. Many items of clothing – such as bib overalls, coveralls and fleece jackets – are made of modern lightweight fabrics that provide surprising warmth. Anglers should consider wearing a layer of thermal clothing against their skin that absorbs sweat and wicks moisture away from the body, thus keeping the angler warm. Anglers can break a sweat trudging across the lake, especially if they’re pulling a load behind them. One should also have on an outer layer of a wind-breaking

fabric. Waterproof boots are a must and a pair of moisture-wicking socks under wool socks will help to keep anglers’ feet warm and dry.

Ice fishing may not be for everyone. But if you’ve ever driven by a Michigan lake in the winter and have seen the “shantytowns” out on the ice, you can tell plenty of people consider ice fishing to be a pretty cool sport.

The Michigan Department of Natural Resources is committed to the conservation, protection, management, use and enjoyment of the state’s natural and cultural resources for current and future generations. For more information, go to www.michigan.gov/dnr.

A downloadable copy of this article is also available in PDF format: Ice Fishing – The Coolest Sport Around