Ferndale Fire Marshal Brian Batten is usually more worried about saving lives and preventing disaster than engaging in political battles.  But when he saw the need for a change in the way fire prevention and suppression systems are inspected in the building process, he got his State Representative involved.  Together they helped navigate legislation through in a uniquely bipartisan way.

SB 235 was approved by Governor Rick Snyder on Nov. 5, having passed almost unanimously in both the House and the Senate.  (Democrats John Olumba of Detroit and Mary Rose Robinson of Lansing were the only ‘nays.’)  The bill allows Certified Fire Inspectors to have the legal authority to register under Public Act 54 as fire protection system inspectors and plan reviewers, and to review and inspect all fire protection systems defined in Chapter 9 of the Michigan Building Code for new and existing construction.

“Most people don’t realize that the [previous] law doesn’t allow that,” said Batten before the bill was passed.  “It

makes sense that the Fire Marshals should be able to go into a building and say ‘yup, that looks right,’ or ‘nope, you need to change that.’  But the way the law is now, it’s up to the city’s Mechanical or Electrical Inspectors.  We don’t have any authority to go in and say what is right or wrong until after the building is occupied.

“In a lot of cities, like Ferndale, we’ll still go in and check things out ahead of time, and let people know what might be a possible problem down the road, but we can’t sign off on the work, and we can’t force them to change anything until after the building is occupied.  That’s when we have the authority.  Having Fire Inspectors involved in the process early on can save a lot of grief later.”

“The worst case scenario is if there is a building inspector who isn’t familiar with fire code and they approve a project, then the Fire Inspector goes in after and finds something wrong that needs to be fixed. This happens pretty regularly in our business.  It delays the opening of businesses, causes extra work and expense, and the business owner gets frustrated with the city, not understanding why the project was approved and then they get a violation.”

In Ferndale and other cities with a full time building inspector, working together is common practice. Although even in those cases, having the Fire Inspector able to sign off on the fire prevention systems can save time for

the other inspectors to focus on other things.  In many communities there is not the budget for inspectors on staff.

The legislation is completely optional. So if municipalities decide for whatever reason that they don’t want their Fire Inspectors to be part of the building process, they are under no obligation to have them be.  “This just gives cities more options and more flexibility to use what resources they have.  We’re in the best position to know how to certify these systems.  It just makes sense,” Batten said.

There is more to getting a bill passed than having a logical argument, however. Batten discussed his idea with State Rep. Ellen Cogen Lipton, and the second-term Democrat agreed with what Batten wanted to do.  “This isn’t

something political or controversial, but we still needed to come up with a strategy,” Cogen Lipton said.  She pointed out that with Republicans in the majority in both the House and Senate, finding a Republican to introduce the bill would give it more of a chance of passing.

“The first thing I did was talk to the Chair of Regulatory Reform on the House side.  After that I thought it might make more sense to try and introduce it in the Senate first.  I asked Brian if he knew of anyone else in his field that might be able to approach their Senator about it,” she said.  “He mentioned his counterpart in Eaton County, and that person talked to Senator [Rick] Jones. Senator Jones ‘got it.’  He knew why this was important.

Dove of Coldwater Fire Department & President of MFIS went to Lansing along with Batten to testify before the Senate committee.  They encouraged their members to talk with their representatives about the importance of the bill.  Batten is also a past President of the MFIS.

“It passed in a bipartisan way, but that’s because we have the issue of working a bill. Sometimes people write bills and expect them to work their way through the process.  But there is more to it.  You need to build a coalition, come up with a strategy, think in terms of timing.  All those things need to be worked through,” Cogen Lipton said.  “In this case the system worked the way it was supposed to.”

Ferndale Director of Development Derek Delacourt said Ferndale had already been involving the Fire Inspector in their building inspection process.  “At the end of the day all parties need to be satisfied to assure the safest and highest quality development. Making sure there are no surprises at the end of the process is extremely important to the business community. Fire Marshal is one of the most important people in that process,” he said.  “We are proud to have Fire Marshal Batten working for the City of Ferndale.  He is a leader in the field of

Fire Prevention and is constantly looking for ways to improve the process and create safer neighborhoods and buildings.”

Delacourt also noted ways that Ferndale has been encouraging teamwork and efficiency.  “Staff, at the direction of Mayor Coulter and Council is constantly looking for ways to be more business friendly and to improve our process.  Inspectors in the CED Department [Community and Economic Development] were recently outfitted with tablets for conducting all Code Enforcement and Inspection Services.  These devices allow the inspector to do the inspection in real time form the field, eliminating the need to return to City Hall to retype/enter inspection information.  This allows us to increase the amount of time an inspector spends in the field, increase the number of inspections conducted during business hours and service our customers more effectively.  They also allow for real time access to permit and property information, allowing the flexibility to make more decisions in the field, increasing our efficiency.”

SB 235 was passed with “immediate effect,” meaning communities can begin utilizing Fire Inspectors who are properly certified.  For details of the bill see http://www.legislature.mi.gov/%28S%28yan5ksm24utgtvvfl2umyl45%29%29/mileg.aspx?page=BillStatus&objectname=2013-SB-0235. 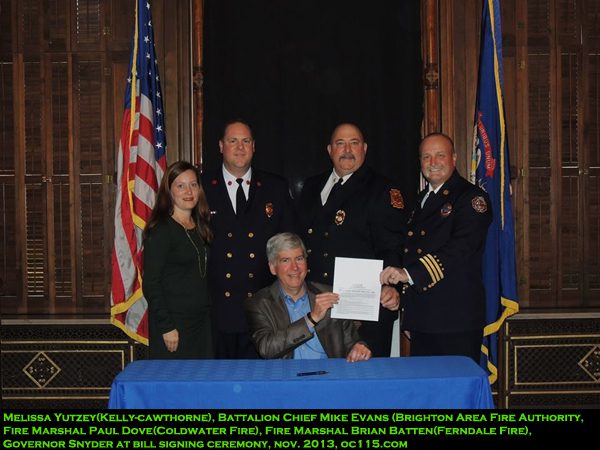