Salmon in the Classroom Comes to Ferndale’s Kennedy School

Salmon in the Classroom Comes to Ferndale’s Kennedy School

The sixth graders in Greg Williamson’s class at Kennedy School in Ferndale have some company in their classroom this year as they get to raise nearly 200 fish until they are large enough to be set free.

The Salmon in the Classroom Program, created by the Michigan Department of Natural Resources, gives youngsters a chance to care for salmon eggs until they hatch, and watch the fish as they grow.  The eggs should start to hatch in January, and in the spring the class will take a field trip to release the salmon into a nearby stream.

Kyra Onyx is among the students in Williamson’s class. “Since I don’t have fish at home this project was very exciting,”

she said.  “Mr. Williamson told us that the salmon would hatch in about a month or two.   It is so cool to see the little black dots or ‘eyes’ in the fish eggs.  I learned that they are actually the little bodies forming inside.   I did not know that salmon eggs had to be put in freezing cold water and I didn’t know that the temperature had to be precise and perfect.”

Classmate Grace Harper said she “learned that the eggs that die turn white but if they are alive they are orange.”  Harper has a fish tank at home with three fish that she takes care of. “I think we will take care of the salmon like we take care of our fish at home,” she said. “I am excited to see what salmon look like in real life.   I have never seen salmon up close.   I think the salmon will look different when they hatch but then change when they get older.”

Jordan Reyes is realistic about the project. “Some will live and most will die,” she said.  “The salmon eggs are orange with a black dot.   If the egg is white it means the egg is no longer living.” The students already saw

one dead egg from the batch that Williamson brought from the DNR. The students know that just like in the wild, not all of the eggs or fish are going to make it.  Proper care and attention will greatly increase their chances though.  “I’m glad we are doing this project because it will give us more information about fish and living organisms and how to take care of them,” Reyes added.

About 200 schools statewide participate in Salmon in the Schools each year.  The program requires a commitment of time and resources.  Kennedy students were able to participate due in large part to a donation of an aquarium by The Aquarium Shop in Royal Oak.

The eggs should hatch in December and for about a month they will be in the “sac-fry” stage. This is where fish

are still attached to their yolk sacs. They will remain at the bottom of the tank until their sacs are eaten up. Then it will be time for the kids to begin giving them regular rations of food.

As the salmon grow, they will change color.  Come spring they will turn silver, indicating that they are in the “smolt” stage. This is the time when nature calls them to leave the streams and migrate towards the nearest Great Lake.

Not only will the students be able to learn about the life cycle, they’ll also see how the streams and watersheds connect to the Great Lakes, and how the ecosystem as a whole functions.  They’ll also learn responsibility as they clean the tanks, monitor the temperature and water quality, and transport the fish in a responsible manner.

“We have food, a tank to take care of the fish and the project is all about observation,” said Lauren Morgan. “We have not received jobs to clean and do all that yet, but we will soon.   I am really excited to watch them grow.   When they hatch I think they will be all gory, but cute. I am really excited to see them.” 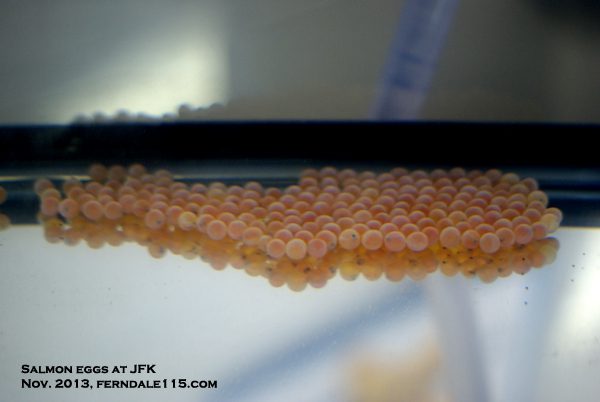 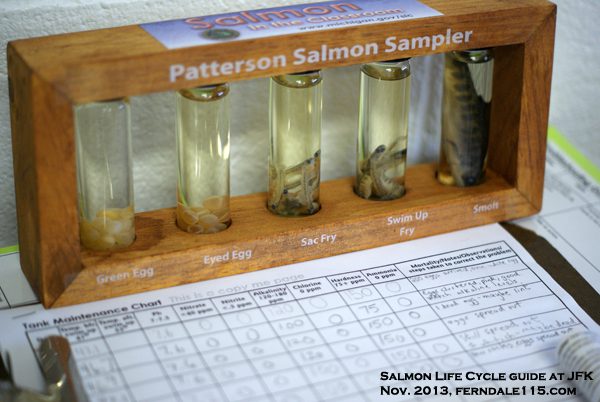 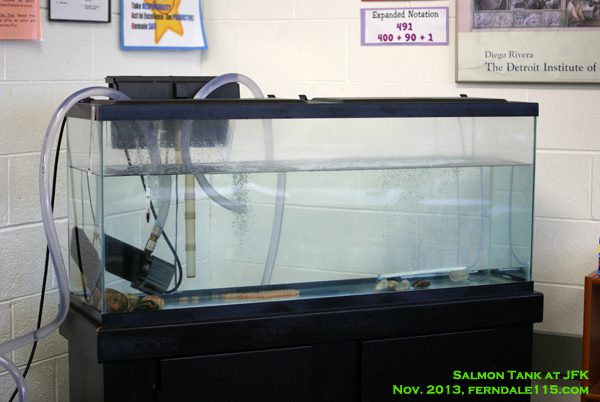