For the past four years, the anniversary of her mother’s death was a somber reminder of loss for Holly Schultz.  Facebook posts and a memory album would only leave her – and the people around her – with the blues.

This year she decided to do something different.  She decided to share her mother’s loving spirit by committing random acts of kindness.  Not only did she succeed in spreading joy for the five days leading up to the anniversary, but she got others on board as well.

“For Mon, Tues, and Wed I have 12 friends/family/coworkers who have told me their RAK for the day. I haven’t had a chance to count all the RAK’s done today, but I know it’s more than 12,” Schultz said.  “Many gift cards have been given to strangers, donations made to numerous charities, treats delivered to teachers, donations to

animal shelters, pennies left in a bag on Sandy at Meijer so kids can have a free ride, Newspapers bought and left out for patrons at Dunkin Donuts to read and enjoy.  My nephew in Georgia made goodie bags to give to two kids along with a dollar and a note asking them to use the dollar to do something nice for another kid!  The list goes on and on and on!”

One of the acts was taping a bag of quarters to the parking meter at the library.  Without knowing who the gifter was, The Ferndale Public Library staff sent thanks back out into the world.  A press release stated “Early Tue. afternoon, staff started receiving reports of a bag of quarters attached to the parking pay station on the west side of the building.

“When staff went out to investigate, they found a note saying, ‘Enjoy your visit to the library today on me! Please take only what you need to cover your parking. Happy Reading! A random act of kindness in honor of an avid reader. Betsy,’ with a plastic bag filled with quarters below.” 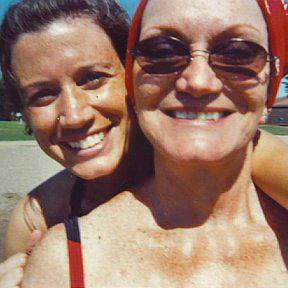 Eve Foley, the Circulation Specialist who alerted the rest of staff, said, “It was really heartwarming. The woman who told me about it said that she really needed to see something like that today, and she didn’t have a quarter, so it was a big help.”

The library used all of its social media outlets to spread the picture they took of the sign and bag. “This is the kind of thing that people love to see,” said Kelly Bennett, who took the photo. “I hope it goes viral.”

The avid reader, Betsy, is Schultz’s mother.  Elizabeth “Betsy” Schultz passed away on Oct. 25, 2008, leaving behind her daughter who is now 35 years old.  While the day is

still a sad one, the random acts of kindness have made a difference to everyone involved.

“It’s definitely overwhelming, but in a great way,” Schultz said. “I thought a few people would participate Monday and then it would just sort of fizzle out. I never imagined it would be like this! My heart is bursting with happiness and love from all the people who have embraced this challenge and have encouraged their friends and family to do the same. Everyone is just so happy and having a blast waiting to hear what the theme for the day is and then coming up with a way to incorporate it into their RAK.”

Schultz is a massage therapist who has lived in Ferndale for three years.  “I love the feeling of community in Ferndale. The residents are all so supportive of each other and local businesses. I love being part of a community that cares about its residents. And I adore that Ferndale is so dog friendly,” she said.

She hopes that others will pick up the idea and think of ways to be kind to others all year round.  One way to tie into others who are spreading Ferndale love is through the Good Neighbors project done through Citizens for Fair Ferndale.  Find out more about that at http://fairferndale.org/.