Candidates Use Web to Reach Voters in Ferndale Mayor’s Race

Candidates Use Web to Reach Voters in Ferndale Mayor’s Race

Politicians through the ages have understood the need to get their name out in front of voters, and the internet gives them one more low cost way to do it.  In the Ferndale Mayor’s race, campaign websites provide information about the candidate, offer opportunities to connect and fund campaigns, and they provide insight into each one’s priorities and personalities.

Political newcomer Linda Parton released her website last week at http://lindaparton.wordpress.com.  Parton is a freelance photographer by trade and the quality of her photography skills shows in the professional-level photos of famous Ferndale places that scroll across the screen.

Parton’s site gives her biography, stating “I’m running for Mayor to provide Ferndale residents with another “option.”  I’m cost conscience, efficient, an educated consumer, good listener, and hardworking. [sic.] My agenda is whatever Ferndale residents want!  I haven’t been “in” politics.  I felt called to “rise up” from within my community and serve it as Mayor.  I love this city and its people and would love to represent each and every person.”  By reading her site voters will see that Parton is 55 years old, a resident of Ferndale for 23 years, and the mother of three sons, one daughter and two stepsons.  She’s got a BA in Photography, is a past Ferndale elementary PTA Vice President and Secretary, a past Scout leader, and a 23 year member of Woodlawn Church.

Her site also highlights the three issues she thinks are most important to Ferndale.  The top issue listed is the Park Plus System.  Her proposal is eliminating the system and “selling them to larger communities that are ‘adding on,’ at a reduced price. These communities would be happy to save a bit of money, and they would help us get out of a system not designed for a small city like Ferndale.  As we sell the 33 Digital Park units we can turn around and start buying the credit card and coin units similar to Royal Oak’s and the surrounding communities.”

She is also against marijuana decriminalization and the cost of water.  In regard to water rates, her site says “Most nearby communities do not pay what we pay!  I have the time and wherewithal to look into this. I’d be the Erin Brockovich of Ferndale. Erin got to the bottom of why water killed people, I will get to the bottom of why water bills are killing people’s budgets.  I would love the opportunity to thoroughly look into this.”

Parton is on LinkedIn, Twitter and Facebook, and she uses StubmbleUpon to promote her WordPress-based site.  Plus her photography business is run online.  Her Facebook page shows that she considers herself politically conservative.

“Being “internet-savvy”, I believe is just as important as being a real “people person.”  I feel I am both!  Knowing your way around the internet is a must!  The online resources found today are so vital to doing this job!  I researched to find some of the pertinent data used to back my position on issues. Personally, I don’t know how we lived without the internet and accessing information quickly!  The internet saves big money when used properly, as most cities should be looking to do,” she said. 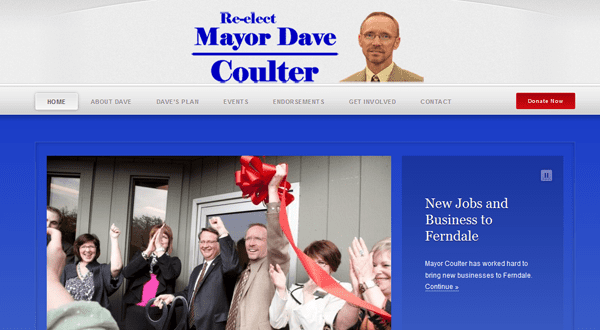 Current Mayor Dave Coulter is also using the internet to reach voters. His lawn signs this year even include his web address, www.davecoulter.com, to help people find more information.  “Online tools have democratized how we communicate and how we learn, and anybody that doesn’t understand that, not just candidates, are quickly missing out on a powerful medium of information, probably as powerful as television was decades ago.

“I’m amazed at how much communication has moved to social media just in the last few years, and I don’t think you can run a campaign like this without at least a Facebook page.  It doesn’t replace other types of campaigning, especially face-to-face, but for getting information out quickly it’s really changed the landscape of not just campaigns but of our culture overall.”

Among the accomplishments listed on his site, Coulter talks about the efforts made to attract new business to Ferndale.  “A healthy commercial and industrial sector is important to our long-term growth, and I want Ferndale to be the friendliest, easiest city to open or operate a business in Oakland County.  I’m committed to making sure every interaction a business owner has with the city supports their success.  I created the Mayor’s Business Council to help make sure we meet that commitment.  Since then, non-residential construction investment is up more than 35%, bringing our business vacancy rate down to its lowest level in years.  In partnership with the Chamber of Commerce and the DDA, we’re united behind a common goal — an environment in Ferndale where businesses thrive and grow.”

Coulter’s site shares a long list of endorsements, and tells about his political history.  “Dave Coulter became the 17th Mayor of Ferndale in January, 2011.  Prior to that, he represented Ferndale, Hazel Park and Royal Oak as Oakland County Commissioner for four terms (2002-2010), where he also served as Democratic Leader.  Prior to being Mayor, Coulter had been active on many community projects.  He worked with the late Gerry Kulick as a council-appointed member of the Community Center Task Force that resulted in the center that bears her name.  He was also a member of the Human Rights Ordinance Committee in 1999, and was a Trustee on the Ferndale Library Board in 2004-05, beginning the work that eventually led to the library’s expansion,” it says. 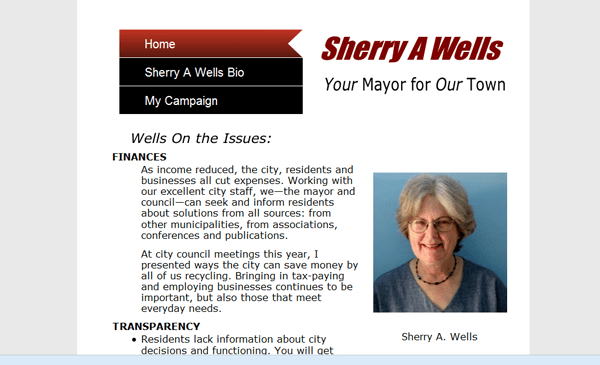 Candidate Sherry Wells also has a website, found at http://sherryawells.net.  There Wells describes her top issues:  Finances, Transparency, Trialogue, and Sustainability. Trialogue is term she explained by stating “I envision a cohesive, balanced community of residents, businesses, and government with an active “trialogue”. We have so much to build upon already and I will facilitate that improved communication.”

The site also states “Residents lack information about city decisions and functioning. You will get those explanations when I’m your Mayor. I will invite more citizen participation and expression of concerns, needs and vision as I did during the Charter Revision process. As mayor, I will be responsive to citizens’ questions and concerns.”

Her biography informs readers that she’s been a Ferndale resident for 25 years.  “I led the push to put the question of a Charter Revision Commission on the ballot in 1996,” the site states. She’s got a Law Degree from Wayne State and a BA in Education from Michigan State.

In terms of community service, Wells’ site stated “My parents raised me to be involved and volunteering. Being self-employed and therefore quite flexible, I found it irresistible. My involvement included / includes the Ferndale Historical Society, the Ferndale Rotary Club, the Downtown Development Authority (DDA), and the Ferndale School District, Affirmations, plus many less formal activities.”

When asked about her level of internet skills, Wells said “I access the city council agenda before every meeting, residents often use email to contact me with questions and information, even between elections. I’m on Facebook and learn about residents’ concerns and frequently can direct them to solutions. I learn about events in our town so I can be involved in them.” She values her own website because “It’s a single place for me to fully and accurately inform many residents about my experience, values and goals and of several ways to contact me.” 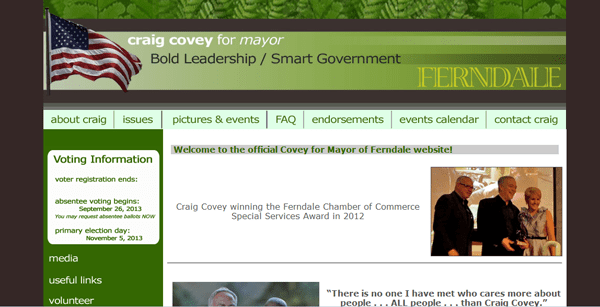 Craig Covey is a former Mayor and County Commissioner who has used social media and websites for years to reach his audience.  “My favorite social media is my blog, www.coveys-corner.blogspot.com – and that is because I love to write (and share ideas and opinions).  My blog has been going for many years, and has hundreds of essays and editorials on environmental issues, women’s issues like choice, civil rights, cultural issues, etc,” Covey said.

Covey’s website http://www.coveyforferndale.com/ also lists the issues he is running on in a letter to voters:  spending and budgets, budget deficits, costs and fees, the new parking system and improving infrastructure.  It also lets the public know about the things he’s accomplished in the 24 years he’s been living in Ferndale.  “He moved to Michigan in 1985 to direct the Michigan Organization for Human Rights. Since 1987 he has worked full time in public health in the area of HIV/AIDS education and prevention for both state government and not-for-profit agencies.

He led efforts in Ferndale to enact a human rights ordinance that would protect all residents and visitors from discrimination in housing, public accommodations, and employment. This legislation was finally passed overwhelmingly by voters in 2003.

The site also lists his awards, endorsements, and facts about his community service, including events that he’s organized, boards he has served on, and organizations he’s created or volunteered for.  Plus there are pictures chronicling those years.

“The website is almost old school, but has lots of pictures and information and can take donations,” Covey said.  “I try to use all forms of communication, and online I use a website, a blog, Facebook and Twitter. I use Facebook every day, and I like that because it is easy to access, and I can keep up with family and friends, and see what folks are up to.  I finally got a smart phone and can post pics etc.  I use Twitter mostly for news and short bits of information to get out to media in a hurry.”

He adds that technology is not the only way to reach people though. “People are all along the route of knowing technology, and we have to remember that some folks are in need of help, or still use traditional methods to communicate.  I will always continue to make use of all forms of media, to be inclusive, including snail mail, the telephone, and newspapers and television,” Covey said.

The candidates will reach voters online, through door-knocking and through candidate forums.  For information on upcoming forums, and other candidate info, go to https://oaklandcounty115.com/2013-ferndale-voter-information/.  There is also information on school board candidates, unopposed City Council candidates, and Proposal A to decriminalize marijuana.