I remember the first time I picked up an iPhone at the Apple Store. It was magical. I think I was reading Coelho’s The Alchemist

at the time and seeing YouTube video on that device was like Santiago picking up Urim and Thummim and the omens that come with it. It was Gollum’s Precious. I had to have it. I was envious of early adopters. Eventually I had an iPhone, found it useful, and I could say it enhanced my physical world and space. All the familiar things which come with a smart phone like email, newsfeeds, podcasts, video content, and maps the iPhone over-delivered. Since that time many years ago I’ve had multiple smart phones and I have to say each one is an upgrade, a tweak to progress.

I remember the first time I read about the iPad. “That looks stupid.” “Who the hell would carry around that enormous cell phone with them?” I think a lot of people shared this sentiment when the announcement was leaked. I had no desire to get one. I was connected enough with my lappie and iPhone. Until I held one.

Within seconds of the first time I held a great graphic designer’s iPad I got it. Content so wistfully

flashed through with a finger tip and the lightness of the device attributed to the elegant design. It was sleek. Restful. In a primitive way I wanted to sit down by a fire and absorb content. I believe the designer had some bright day-glo keyboard app for his kids and I was spellbound by the noise and colors. I could see myself playing the app all day. I didn’t want to give it back.

My experience with Google Glass was a little different. Last week I experienced Glass thanks to my friend and colleague Maria Jewett who wrote into Google saying she should be an early adopter. Her story and ideas caught their attention, she flew to New York, picked up Glass, and came back to Detroit. I was fortunate to meet her at the Guardian Building to give them a try.

My first impression is it really does look like simulator videos that show an environment with a little square television in the upper right hand corner that has some degree of transparency. I found it ironic and a bit ominous it is very similar to the technology found in the apocalyptic and transhumanist Google produced YouTube video series H+. If  you watch some of the previews it does seem like that’s where Google Glass could end up.

I found it clunky and a little jarring. I imagine someday I’ll look back on the encounter the same way I remember seeing people carrying around purse sized mobile phones or beepers. Having to lift up

your head to turn off and on, swiping with your index finger, or say commands didn’t feel natural. Like many I’ve heard the rumblings of people getting headaches and I can understand that.

I was also in guest mode so admittedly I haven’t had the full experience. However, I saw the samples of seeing a person’s social mugshot with their name next to them in your field of vision. All privacy aside, if we were all connected and opted in with our friends, that phenomena and ability is completely new. It’s cool but I don’t think it’s one I seek. When I’m flying on a plane I like my anonymity. 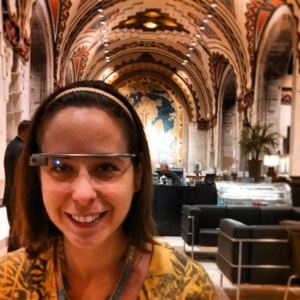 As I was using them I realized midway through Maria, who I was just enjoying a cup of tea with, completely vanished from my focus and attention. She was talking and quite honestly I wasn’t paying attention, I was focusing on the images of jellyfish on the Glass. It’s sensory over-drive, video game-like. One has to focus on two points. How klutzy and strange it would be for two Homo sapiens each with Glass to have a conversation. I can imagine a lot of “Huh’s?” and “What did you say?”

Another thing that came to mind is the digital divide. Issues of class in our society are now issues of the haves and have-nots of technology. I remember for my company we volunteered in a low-income community at a school to help 7-year-old kids in the computer lab. It was obvious

these children didn’t have computers in their homes and time on the standard-issue PC at school was it. I was humbled and inspired by their eagerness and excitement on the computer but also taken aback by their lack of familiarity with hyperlinks and operating systems using my similar-aged daughter and her friends as a barometer. Kids are lightening quick to understand and figure out technology but the low-income communities I fear are becoming isolated further and further from this technology. What happens when these $1500 Google glasses go mainstream? Maybe they eventually sell for $500. Sergey Brin said going back to a smart phone made him feel “emasculated”.  He said he felt more engaged with reality and aware of his surroundings with Glass. His hands were free. What’s the opposite of “emasculated”? Powerful? Omnipotent? Watching the video of him talking it looks like we’re getting into cyborg territory. I pose the question when it comes to society at large, we don’t even have to get into class, empowered over what? And why?

Slippery Slope territory. A Pandora’s box is being opened and my thoughts are still out there whether this is cool.

ABOUT TIM ATEN – First off, all content on TimAten.com are the views of Tim Aten and nobody else. By no means does it reflect the views of any employers past, present, or future.  His website is the repository for his thoughts on mainly-internet-related themes like SEO, Efficient Tech, and Content Marketing.  He lives in Ferndale and has this to say about his work “I’ve done a lot, seen a lot, experienced a lot and have come to the point where I need to share the written word rather than thoughts casually arising in conversation only to linger in the ether. I see writing and sharing as paramount to “the spirit of the internet” and ultimately helps others learn, grow, and find new ideas. When we share it goes both ways.”