Plan Your Own Business So You Can Make the Rules 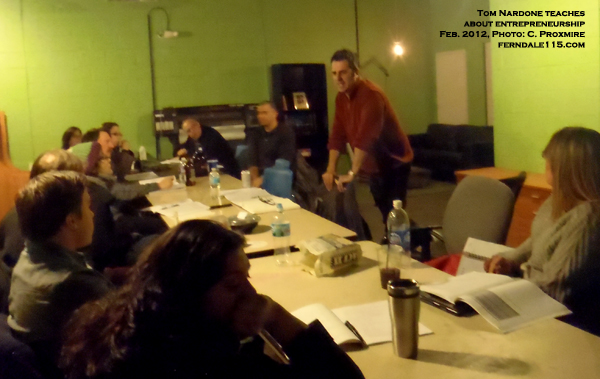 Own Your Own Business So You Can Make the Rules

Tom Nardone is one of those guys.  The ones who walk around happy as hell, no cares in the world, while constantly accomplishing great things.  Like starting a company that specializes in delivering products to adults in a private way, a volunteer group that mows the grass at inner-city parks, and achieving national fame as a pumpkin carving extraordinaire.  Plus he’s got a wife and kids – a full and happy life.  Why? Because he does what he wants.  And because he does it in an organized way.

Nardone is a firm believer in the idea that if you run the show, you make the rules.  He recently shared his entrepreneurial wisdom at a class held at Paper Street Motors (1151 E. Jarvis).  The class was for people who want to own their own businesses.

But of course it’s not as easy as it sounds, because even though you may create a relatively carefree work environment, entrepreneurs still need to have basic business skills and a good plan if they are going to have a shot at making it.

The two-part class gave eight steps for creating a business plan, along with plenty of good examples to help students understand the process.  The steps are the Business Description, the Market Analysis, Competitive Analysis, Marketing Plan, Process, People, Money and Executive Summary.

“I know from my own experience that my business plan is the most valuable document I ever created,” he said.  “It’s free.  It prevents f-ups.  It can save you money, time and energy.  If you don’t create one first, you will be too busy f-ing things up to create one after you launch your business.”

One example of failed planning was one of Nadrone’s “great ideas” ten years ago.  “I launched a business where we sold shampoo for head lice.  There were articles written about insecticide resistant head lice, saying we as a culture might have to live with head lice the rest of our lives.  And we’re selling the barest amount of head lice products on our website that sells all these discreet products. So I launched an online store of all head lice related treatments products.  I probably put $10,000 in time and energy into building this up, but it was a terrible idea.  So one thing I did wrong was I took a media story as real market research, when really it was just hype.  And there was another obvious flaw, if you had head lice did you really want to wait a few days for stuff to come in the mail? No, you’d go to the store right away. ..Nonetheless I had to pull the plug on that one,” he said.

The class came with a guidebook, outlining the steps in detail, with a very straightforward approach.  For example, when describing the importance of the business description, Nardone’s lists:

1. It is hard enough to do one thing really well.  You need to pick what you will do well and describe only that here.

2.  It takes a lot of practice to become good at something.

3.  It is almost impossible to do many things well.

4.  If you keep changing what you do, you will be terrible at everything.

5.  You need a good, solid, specific business description to say what you do; then try to do only that.

In his case Nardone was thoughtful enough not to combine his pumpkin-carving enterprise with his online discrete delivery service.

Some bigger-named entities have suffered from problems with clarity in their mission statement.  Kmart claims to be “a mass merchandising retailer that offers customer quality products through a portfolio of exclusive brands and labels such as Craftsman, Kenmore, DieHard, Jaclyn Smith, Joe Boxer, Route 66 and Country Living.”  And Boston Market’s is too vague – “Giving time back to busy people since 1985.”  Twitter is even worse, having no public business description at all, to which Nardone says “It shows; the site is tough to use and not intuitive.”

During the first session, students were taught how to create their own business plans, and for the second they brought them to the table to address issues they may have had.  The aspiring entrepreneurs had ideas for retail shops, social media websites, photography businesses, restaurants and food carts.  Though all good ideas, those that complete a business plan and are honest about their prospects will be in a better position for success.  “I thought the class was very valuable. I think I crushed a few dreams, but I also taught people that not every dream is going to be successful and that before you spend your life’s savings on launching a business you should examine it carefully to determine if idea has merit,” Nardone said.

Prior to launching his own business, he worked as a business plan writer and analyst at Ford Motor Company where he ensured that Ford’s full-size SUVs were successful.  Since going independent, his company, PriveCo has been mentioned in the Wall Street Journal, Money Magazine, and Nardone has been profiled in Success Magazine, appeared on Good Morning America (three times), Regis and Kelly (twice), Rachel Ray, and Conan O’Brien.

He has been a guest speaker at entrepreneur classes at Oakland University for the past five years, and he anticipates continuing to do classes at Paper Street.  To find out what classes are available, check out www.welovepaperstreet.com.

If you support independent community news, consider becoming a sponsor of The Ferndale 115 News or giving through our Charity of Choice program.

Royal Oak Gets Grant for Planting 100 Trees and Other Ecosystem Improvements
February 6, 2023