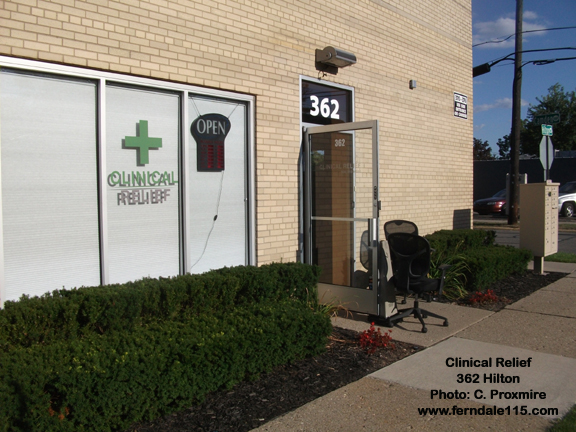 When the owners of Clinical Relief, formerly located at 362 Hilton, opened in May 2010 they did what they thought they were supposed to.  They applied for a business license, they went through the permitting process, had walk-throughs with local police and city officials, and referenced the State’s Medical Marijuana Act and the Oakland County website when creating a business plan they specifically believed complied with the law.

Clinical Relief sold marijuana out of a retail location to customers who had a state-issued medical marijuana card.

They set standards for who they would sell to, making customers fill out patient health forms and requiring them to show a valid card before selling them marijuana.  They provided counseling on the products and set limits on the purchase amounts.

It is this diligence and clearness of intent that has now spared Clinical Relief owners and employees from possibly going to jail on drug charges stemming from a Wednesday, Aug. 25, 2010 raid on the medical marijuana clinic, according to defense lawyers in the case.

On Wednesday, January 11, 2012 three of the attorneys who represented defendants in the case held a press conference to announce the freedom of their clients.  Attorney Neil Rockind said he believes the prosecution will appeal, but that it’s a victory nonetheless.

Barbara Agro and her sons Anthony and Nicholas Agro were slapped with drug charges in 2010 along with Barbara Johnson, Ryan Richmond, Ryan Fleissner, Matthew Curtis and Angelina Veseli.  The arrests followed a month-long surveillance operation by Oakland County during which officers posed as state-approved medical marijuana patients and made marijuana purchases.  Based on those purchases, officers in SWAT gear raided the clinic and arrested 15 people including legitimate card-holding medical marijuana patients.

Police confiscated all of the clinics medicinal supply, confidential patient records, some computers, telephone equipment, the modem for the security cameras, press clippings, thank you letters, and cards that were tacked up on the bulletin board in the waiting room. They later raided homes of the business owners and confiscated money and personal property, which police claimed was died to drug trafficking.

Because they acted with the sincere intent to follow the law, were guided along the way by city officials and police officers who all believed they were following the law, and because the law was vague and did not have any judicial precedents to guide them, the charges against the Clinical Relief crew were dropped.

“If they had criminal intent they went about it in a pretty dumb way,” said Attorney Neil Rockind, “They had a business with a sign, a phone number. They actually asked the city to come in and approve a certificate of occupancy.  The police walked through.  They actually allowed media to come in and take photographs. 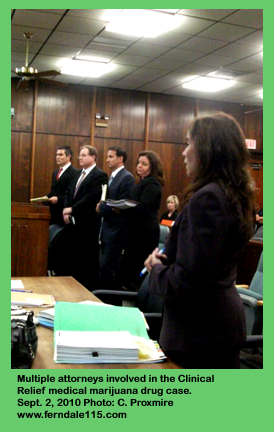 ‘…When they did it [opened Clinical Relief] they had every reason to believe their interpretation of the law was accurate and that their behavior was lawful.”

Defendant Ryan Fleissner said he is “elated, ecstatic and relieved” by the court’s decision to give him his freedom.

He said it was frustrating not being able to share his side of the story when it first came out.  “In the beginning we were all judged in the court of public opinion without being asked questions or being able to explain…All you saw was what the Prosecutor wanted you to see.  We’re not this mafia family selling drugs on street corners. A lot of people we were helping were suffering. I saw people with cancer, people with Multiple Sclerosis, one person with their spine fused together. It was sad.”

Fleissner was a patient before deciding to help others by working in the clinic.  The now 31 year old Livonia man was involved in two major car accidents and has since been diagnosed with Addison’s Disease.  During the 2010 raid he had to be separated and given medical attention.

Fleissner’s attorney, Cheryl Carpenter, said that while the ruling won’t affect new medical marijuana clinics, she does hope it will provide grounds for patients who thought they were complying with the law to be freed.  Medical marijuana clinics are no longer allowed. Thomas Loeb, another defense attorney, also spoke at the press conference.  Each defendant in the case had individual legal counsel. Loeb, Carpenter and Rockind were joined by Steve Fishman, Paul Tylenda, Jerry Sabota, and Matt Shepherd in defending Clinical Relief’s personnel against the drug charges.

The Oakland County Prosecutor’s Office has not yet released a statement on the ruling, though Rockind says he is thinks the prosecutor will appeal.  More information will be added as it becomes available. 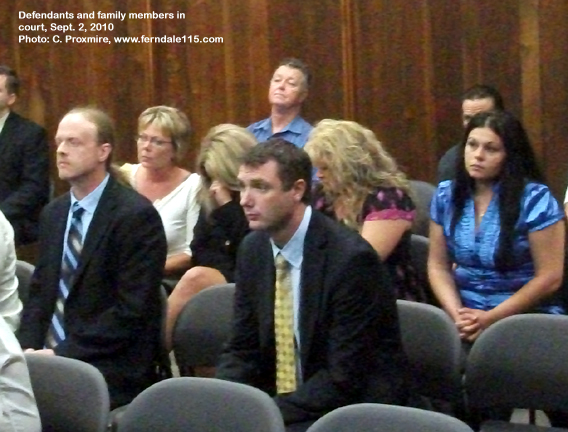