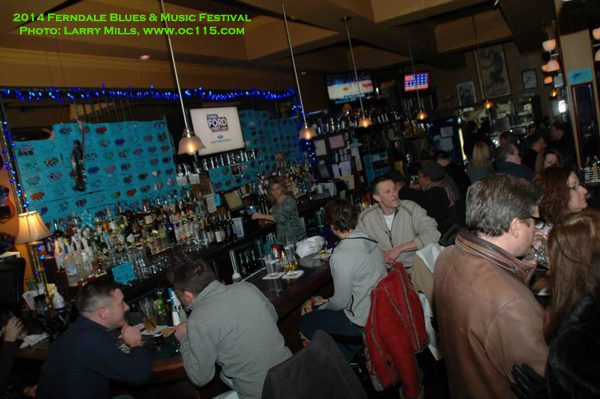 When Billy Sandifer, owner of Dye Salon (262 W 9. Mile) went down to Eagle Ridge Golf Club near Fort Myer, Florida he expected a leisurely afternoon of drinking beer and hitting around the ball.  What surprised him was the alligator.  And also the chance to make a new friend.

Sandifer and a pal named Jeff went out to golf, and by happenstance a third player was added to their group.  Eighty-five year old Joe Due didn’t seem too happy to join Sandifer and his friend.  “When he had to sit next to me in the golf cart we didn’t talk for three holes. In fact the only thing he said was ‘hi’ and ‘You have tattoos, wow,” recalled the young hair salon owner.  “He was the most conservative person ever.”

The silence was uncomfortable, so Sandifer – a fun-loving kind of guy, decided to break the old man’s grumpy spirit.  There was an alligator on the course, which is actually very common in Florida, yet still an exciting creature to see.  “The fourth hole was when I noticed ol’ Joe making an outrageous effort to avoid going anywhere near that alligator.  We passed the gator and Joe got out to hit.  I thought it was time for Joe to face his fears, live a little!  I slid over to the driver seat and when Joe got into the cart I started driving back in the gators direction!! Joe was shocked and started talking a lot at this point  ‘I think your ball is up there!  You’re going the wrong way!  What are you crazy? Let me out!! There’s people behind us!

‘I didn’t say one thing to Joe until after I pulled up to that gator Joe had tried so hard to avoid.  It was so amazing to see this slow paced 85 year old man have all that energy! His blood was rushing, and all I could say was “Joe, you could have jumped out of the cart anytime you wanted.

‘He looked at me and said my jumping out of moving golf cart days are long gone!’ He smiled for the first time at me and I smiled back and said ‘So does that mean your days of being eaten by a 8 foot gator are still ahead of you?’

‘He replied APPARENTLY GOLFING WITH YOU!! I smiled and he actually let me drive the cart the rest of the day needless to say the next beer I offered him he accepted with kindness and a warm smile,” Sandifer recalled.

The three men carried on with the course, and when the opportunity arose Sandifer went after the beast himself.  Most likely the beer had something to do with it, and chasing alligators is NOT recommended.  But he did it anyway, and the senior citizen golfer had a delightful time trying to figure out how to work Sandifer’s camera phone to capture the excitement.

Sandifer admits that alligators are pretty common in Florida.  “I saw probably 50 of them when I was there. The one I chased was about 8 feet.  The biggest I saw was about 9.”

Fortunately the alligator darted back into the water when Sandifer ran at it.  “My wife Angela is always worried about me when I go to a golf course especially when there are 2,000 pound animals out there.  I just don’t fear them or respect them the way I should and she knows that. Nothing could have stopped me from returning to my beautiful wife and son!”  Sandifer’s son Remington is just 14 weeks old.

In addition to the lovely family at home here in Ferndale, Sandifer has a business that has grown over the past nine years in Downtown Ferndale.  “I never thought I would be able to get this far so fast,” he said.  “I truly feel blessed by God, my family, and staff and the city of Ferndale.  I was the only stylist at the beginning when I opened up my first location, I had no money. My house payment was three months late.  I was parking my truck three blocks away so the repo guy wouldn’t take it, and my utilities where getting shut off every other month. My first 2 years I had to walk to work because I didn’t have the extra money for a car.

‘We had a grand opening party and my friend donated the wine Mark from Zodiac vodka.  Urban Chris was generous enough to DJ it for free. And a guy I didn’t know well named Mike Denardo, a builder, worked for over 100 hours out of the goodness of his heart to get my shop in shape.

‘The crazy thing is I didn’t ask anyone for help how odd that sounds these people just showed up with a strong offering to help and I was in no position to say no.  In fact the only person I asked for help was my girlfriend Angela. She gave me fifteen dollars for ice for my grand opening party. That’s where my life started.

‘Some one said success isn’t where you end up but how far you have gone from where you started. Well, That Angela girl became the love of my life and she gave birth to my beautiful sweetheart son Remington Robert.  Mike the builder is now my best friend like a brother, and was the best man at my wedding. I have had many stylist come and go and learned so much from them all, and currently house over 15 amazing stylist at the location of my dreams. It might sound a little like a sob story but in actuality I’m so proud of how hard things were because it really made me a stronger person and salon owner.  The hottest flame’s build the toughest steels.”
The alligator encounter is embedded below.  Remember kids, DO NOT TRY THIS AT HOME… or in Florida.  And be sure to check out Dye Salon at 262 W. 9 Mile Road in Downtown Ferndale, or check them out online at http://www.myspace.com/dyesalon.