When Wayne and Sarah Maki purchased their house at 1527 Pearson they had no idea that their 1929-built home came with a 200-year-old mystery buried in the back yard.

“We were roto-tilling our backyard to lay down new grass seed, and it was near the end of our tilling,” said Wayne.  “There was a ton of broken concrete underground in our yard, so I didn’t think much of it when the tiller hit.” But instead of another concrete chunk, the 31-year-old photographer happened upon what appears to be an 18th century tombstone that had been lying face down beneath just a couple inches of dirt.

The couple was shocked as they unearthed the poured concrete slab with words that were most-likely etched in as the concrete was setting up, sometime in the 1700s.  After consulting with a scientist at The Cranbrook Institute and Ferndale Historical Museum Director Garry Andrews, they have been able to make out some of the words on the tombstone and have some guesses as to what might be the story behind it. 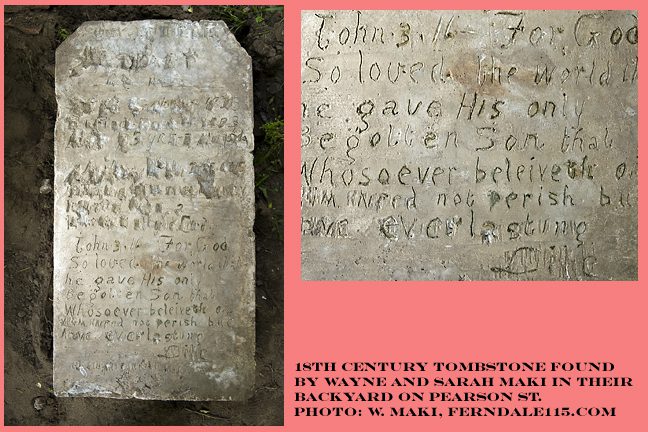 “We think the first name is probably Emma,” Wayne said as he knelt beside the stone and pointed to the places where ice had most likely damaged the lettering over the centuries.  The best guess is that it says:

There is also an indistinguishable line of markings that were probably text along the bottom left of the stone.

The couple ceased yard work and consulted the experts.  “If we continue to dig and find anything, it becomes a police issue,” Wayne said.  “Any time human remains are found it becomes a crime scene and an investigation must be performed….  Chances are there is a grave there and when they came through to put in the subdivisions the contractors just knocked over the tombstone and plowed dirt over.  That’s what they did back then because that was a lot easier than reporting the grave and

slowing down the construction.”

In addition to the tombstone there were two long slabs of concrete below the surface of the ground directly in front of the tombstone – laid out lengthwise next to each other in a way that would suggest they might be protecting a body.

Wayne and Sarah purchased the house in 2008.  To find out more about their home, they visited the Ferndale Historical Museum (located at 1651 Livernois), which has information about the history of most properties in the City. They learned that before them their home ad been owned by a couple named Rosie and Louis, who owned Delta Armature, a company that invented electric motors for PT Boats in World War II.  “Louis worked

on the motors in the basement and garage,” Wayne said.   “He died in the 80s and his wife lived alone for years.  They didn’t have any children, and when Rosie died the neighbors said she was in her early hundreds.”

Before the homes were built in the 20s in what was then called the Legget Subdivision, the land was a large farm owned by the Legget Family.  “We found some information about a tavern called The Lockwood Talbot Blockhouse, which was on the Pontiac Trail.  We don’t know where, but the descriptions sound like it could have been this area.  Maybe Emma was from that Talbot family.”

Sometimes tombstones get moved for various reasons, such as theft or vandalism, so there is no guarantee that there is an actual grave in the back yard.  However the fact that the stone was lying face down and there were concrete slabs in front of it makes it more likely to be a legitimate burial site.  The Maki’s don’t intend to find out for certain.

“We feel like she is probably there, and whoever took the time to bury her in that spot obviously wanted her to stay there and rest in peace,” said Sarah.  “We’re not sure yet, but we may put the tombstone off to the side a bit, underneath the lilac that is growing nearby.  That would be a pretty and peaceful place to keep it.  We want her to be remembered.”

The tombstone is currently being stored until a tombstone expert from the County can examine it, and the couple can decide how they want to best preserve the 200 year old marker, which is theirs to keep unless it is ever taken away for evidence. 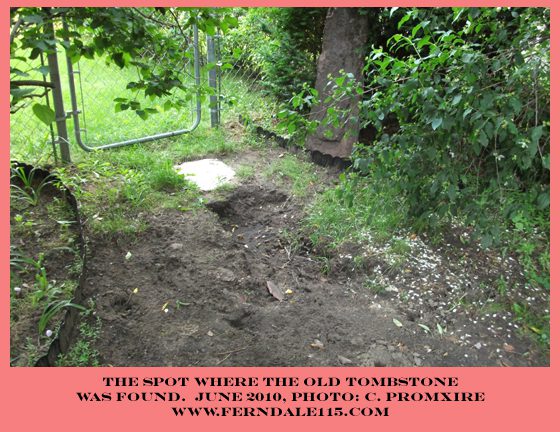 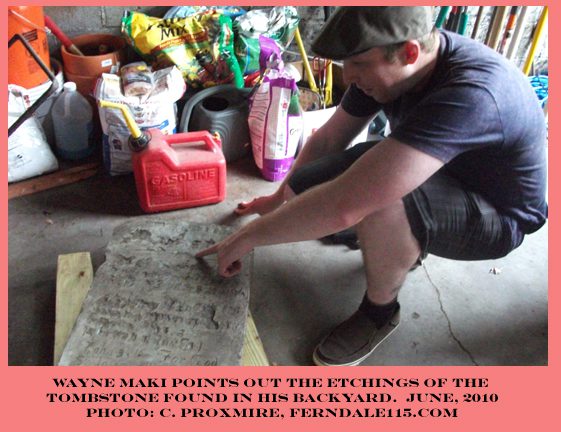 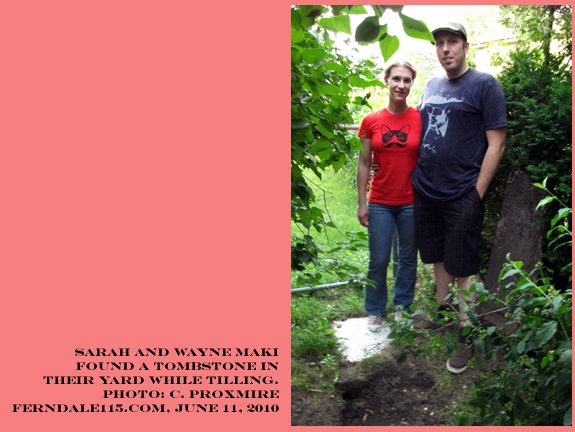