Magic at the Ferndale Public Library

Magic at the Ferndale Public Library 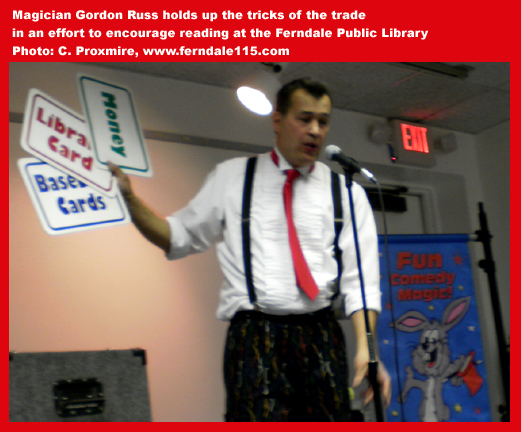 By, Crystal A. Proxmire

About a dozen families came together at the Ferndale Public Library’s temporary location on Saturday, April 17, 2010 to literally share in the magic of reading.  Ferndale’s resident magician Gordon Russ guided the youngsters through the mystery of the missing library card, a show designed to get them excited about the things they can learn at their local library.

“When I wanted to learn about being a magician, I went to the library and checked out books on magic.  You can find books on anything you want to learn about,” Russ said.

While getting the kids enchanted with hilarious and mystifying tricks, the magician talked about the importance of reading, and how many good resources a library has.  He asked the kids if they knew any jokes, and recommended they check out joke books.  He also pulled out the book that he is reading now, The Cat in the Hat.  “Don’t laugh,” he said.  “I like to read it over and over to my neighbor. When you read to someone else it helps make them a better reader and it makes you a better reader too!”

The children enjoyed helping the magician uncover clues, including  a letter “O,” discovered by a red balloon turtle that ended up perched on the nose of an assistant from the audience named Vivian’s. That, along with three other letters, made up the answer to the mystery of where to find the missing library card.

For over 20 years Russ has been entertaining and teaching children with his magic shows with themes like geography, All About Michigan, and a program that teaches scouts their own magic tricks.  Russ has performed across the United States and in Europe, Australia and China, yet he still makes time to entertain the children of his magical hometown of Ferndale, Michigan.

The Library is preparing to open their new location by July 10, 2010.  For more information about the grand opening, or any other events, please go to http://www.ferndale.lib.mi.us.  To find out more about performances by Gordon Russ, go to www.gordonruss.com. 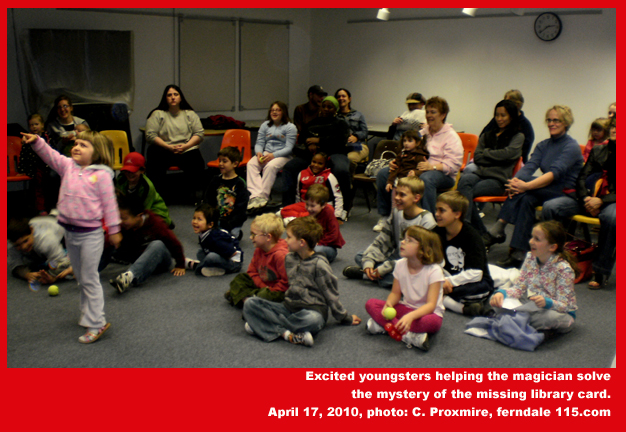