Ice Cream and Comedy Drive Away the Blues 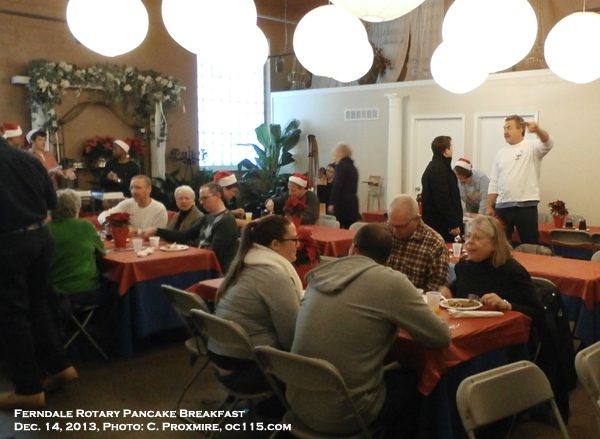 Ice Cream and Comedy Drive Away the Blues

The smiles on the kids faces gobbling down cups of free ice cream were almost as big as the one on PJ Jacokes the day he was presented with his prize for the Edy’s Ice Cream “A Taste of Recovery” Contest.  Jacokes’ essay on the importance of making people laugh even in hard times earned him the honor of being the official spokesperson for Edy’s newest summer flavor “Red, White and No More Blues.”  Official Edy’s Taster John Harrison and his team flew out from Edy’s corporate headquarters in Oakland, California to help Jacokes throw an ice cream release party – complete with a demonstration on the science of ice cream tasting and a free improv show at Go Comedy! Improv Theatre. Best of all Jacokes was got one of those nice big card board checks in the amount of $100,000.

More than 14,000 people sent in story submissions and five of them were chosen to make a video entry explaining why they should represent “Red, White and No More Blues.”  Jacokes’ essay began…

“I live in Metro Detroit, an area that has been recovering for the past 50 years. With all of the recent automotive hardships, things here have been rough for everyone. I’m entering this contest with the hope of winning a chance to continue my dream. As the co-owner of a new small theater, I’m trying to keep my head above water and the community in good spirits. I can’t offer many new jobs, I can’t save the economy, but I can offer of taste of recovery. Our goal is to keep Detroit laughing, while we, as a community, figure out what’s next. I can’t change the world, but I can do my part. Plus I love Ice Cream – which isn’t nearly as lofty, but totally true.”

The judges lapped up Jacokes charming video entry, which can be viewed by clicking here. http://firstlinemedia.com/epk/taste/videos/jacokes_rcovery.wmv “PJ‘s story captures the essence of what we set out to do with the debut of this ice cream,” said Harrison  “We selected an individual who spends his days making people smile, and we’re thrilled that PJ will continue the tradition as the spokesperson for Red, White and No More Blues.  We hope his story will inspire other Americans to pursue their dreams.”

“Mother always said that if you do what you love the money will follow,”  Jacokes joked.  “I think she meant get a second job, but I like this much better.”

In the 1930s Edy’s introduced the flavor Rocky Road to “give people something to smile about” during the Great Depression.  And now they are distracting us from our woes again with this sweet vanilla ice cream that is thick with swirls of syrupy strawberries and blueberries.

Jacokes says he will use the prize money to help “keep lifting the spirits of friends, neighbors and strangers by sharing laughter and plenty of ice cream.”

Go Comedy! Improv Theatre offers programming most nights that is low in cost, but high in laughs.  They even offer monthly MARVIN nights with a pay-what-you-can-afford admission for those who are unemployed or working poor.  You can find information about all their great shows at http://www.gocomedy.net/.  More info on the ice cream can be found at http://firstlinemedia.com/epk/taste/ .